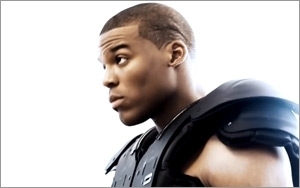 Shavers and antiperspirants are the typical men's care products associated with football and sports in general. Not often do men's fragrances venture into this area. L'Oreal is making an exception with Drakkar. The male fragrance brand — which in the past L'Oreal has aligned with Mr. T and Dale Earnhardt, Jr. — is backing its new fragrance, Drakkar Essence, with NFL quarterback Cam Newton of the Carolina Panthers.

The campaign is also unique for the company in another way: it has a big social media, consumer interaction component, also featuring Newton and his off-field persona. The digital effort includes an exhortative video about Newton and how he finds power off the field. The effort encourages men to post videos or pictures of themselves at moments when they feel the most powerful, using the hashtag #showyourpower.

The video spotlight's Newton's charitable activities and how he likes to help underprivileged kids. "It is the most participative campaign we have done, and the first time we have done a social media campaign like this," says Alexandre Choueiri, L’Oreal president of international design collections. For every social post using the hashtag, Drakkar Essence will donate $5 to the Cam Newton Foundation, which provides resources to underserved children and communities.

Choueiri tells Marketing Daily that football is the right channel for reaching a critical demographic —  Millennial men. He makes an interesting point about why football is a mundus novus for players in the cologne world. "Most fragrances houses are foreign, and they generally tend to choose disciplines or sports that are more international. We wanted to do something different and talk to (American men) about a sport that is relevant to them. That's a new bet for us."

He adds that the company chose Newton both because he's a star and because he's pretty well known for his sartorial sensibilities and causes off the field. "He is not only driven by the fact that he's an athlete but that he's also super keen on styling, and on grooming, and an expert in terms of fragrances. We have had long conversations with him about that and what is of olfactive interest to him."

While Drakkar is the biggest male fragrance supplier in the U.S., with about 50% of American men over 30 having used it, per the company, Choueiri concedes that the market isn't on a steep growth curve. "And this is one initiative aimed at growing the category and talking to customers who may not be shopping for fragrances right now." Besides social, the effort includes print ads running in publications like GQ.