Stuart Elliott has covered many record-breaking stories during his 23-plus years at The New York Times: record advertising account wins, record Super Bowl commercial prices, record agency merger deals -- and at least one failed one.

But when he announced his retirement on Facebook this morning, Elliott set a record of his own, becoming the longest-running ad columnist ever to serve at the Times, beating previous record-holder Phil Dougherty by more than a year.

That’s ad industry news for several reasons, not the least of which is the importance the Times’ ad column has held for the ad industry.

As Madison Avenue’s hometown paper, the column has frequently served as the industry’s “newspaper of record” for breaking important stories, or at the very least, for putting them in definitive perspective.

In breaking his news, Elliott did not, however, scoop anything about his successor, but it will be interesting to see who, if anyone, the Times names its next ad columnist, given the rapidly changing nature of the ad industry, and the way it gathers its news.

Tellingly, Elliott broke his own story via social media.

When Elliott became the paper’s ad columnist in May 1991, the Internet was still in its infancy and the World Wide Web, much less social networks, blogs, microblogs, and even Google, weren’t even a gleam in the eye of their inventors.

Given the sexual politics that have raged at the Times in recent years, it will also be interesting to see how the paper weighs gender as a factor in Elliott’s successor. Previous ad columnists, including such luminaries as Backer & Spielvogel founder Carl Spielvogel, Interactive Advertising Bureau chief Randall Rothenberg, and longtime Hollywood editor and player Peter Bart, were all men. 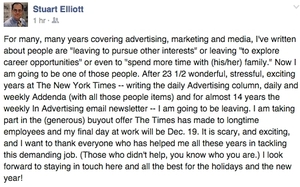