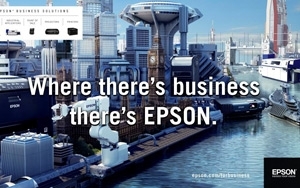 Epson America is out to show the company is more than printers (and a part of the future) with a new business-oriented effort that melds sci-fi and office equipment.

“A lot of people know us for printers, but not a lot of people know we do robots and projectors,” Lucie Milanes, Epson’s director of marketing strategy and communications, tells Marketing Daily. “We’re everywhere, and people are not aware of that.”

“Our goal was to create a visual experience that both catches and keeps the attention of the viewer,” Milanes says. “It’s the link between technology and where we’re heading into the future.”

Beyond the airport signage, the campaign will roll out into other areas such as business and financial print publications, digital media, radio, television, direct response and out-of-home ads in prominent venues (such as Madison Square Garden). The next phase of the campaign will include Epson customers sharing their real-world experiences with Epson products (particularly in surprising places, such as fashion), via social channels using the hashtag, #Epson4Biz.

“We’re fielding stories about how Epson has impacted the world,” Milanes says. “It’s about letting people know we’re at the forefront of technology.”