Audi A6 Escapes Attack Of The Mutant Drones 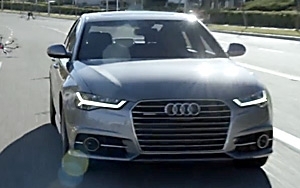 Audi’s 2016 A6 is for the birds. The Herndon, Va. luxury car brand has launched a humorous campaign for the sedan whose lead-off TV spot updates, in a truly creepy way, the most famous sequence from Alfred Hitchcock’s ornithological horror movie, switching out rogue crows for the much scarier prospect of rampaging flocks of drones. That launch spot is one of a trio of ads that have debuted a new tagline: “Challenge All Givens.” The campaign, via Venables Bell & Partners, focuses on technology and how the new A6 makes it easy to use, thanks to its intuitive interface.

The launch ad recreates the famous schoolhouse scene, with adults instead of kids, where a bunch of office people have to make a run for it, while hundreds of drones (some of them carrying Amazon-like boxes, and all of them far creepier than birds) hover overhead. The guy who owns the A6 has the cooler head that prevails. He tells everyone to walk as quietly as possible. But of course, panic hits, and they take off running, while being buzzed by the drones. The hero leaps into his Audi, uses his onboard navigation and warning features to get away. The ads ends by saying “Advanced technology doesn’t have to be intimating.”

A second shows a father with his daughter, and gets into the car’s Facebook functionality. A third ad extends the “challenge” idea to a community pool, where a kid defies a lifeguard (with a cool fantasy sequence involving Navy frogmen).

Loren Angelo, director of marketing at Audi of America, tells Marketing Daily that the focus on the idea that technology doesn’t have to be overbearing is especially important for the large-car region of the luxury-car market. “We have seen different segments respond to key driving characteristics. For the A4 segment, performance is a leading driver. When you look at A6 and [Audi's flagship] A8, it is clearly technology and innovation.”

The ads will run on national and cable, and the campaign includes national print and digital executions. The TV ads are on cable, cable sports, cable prime, and network prime, with the drones spot airing during prime time nationally on CBS, NBC, AMC, ABC and FX. Digital placements are in The Onion, The New York Times, Forbes, ESPN and Wired. The automaker will also put a big focus on relationships with publishing partners like TheNew York Times around native advertising and longer-form branded content with The New York Times and the Onion.

Angelo says the ads extend Audi's longtime positioning as the challenger brand in the luxury business. “Whether it's 'old luxury' or the convention of what is traditional in racing, or challenging foul weather, these are things the challenger spirit evokes, and we bring it to life by relating it to cultural trends.”

The campaign also involves out-of-home installations: starting March 30, Audi backs complimentary WiFi in select airports. Audi is also sponsoring The Washington Post’s digital coverage of the White House Correspondents Dinner in April, including sponsorship of the live blog, photo and video coverage, and speech analysis. In addition, Audi will run a home page takeover on The Onion on April Fool’s Day, in conjunction with sponsoring its Tech Trends episode.