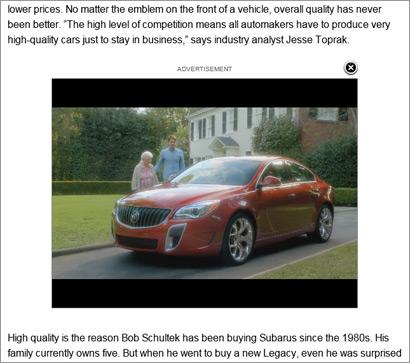 Vibrant Media plans to enter the pre-roll ad market competing with video advertising networks in the U.S. on viewability, scale, targeting and budget. The company will go head to head against established players such as AOL's Adapt.TV, Adobe's Auditude, Yahoo's BrightRoll, and YuMe.

"The market has pent-up demand for good quality video," said Craig Gooding, founder and executive chairman at Vibrant Media. "While there's a ton of relevant video, it's not as targeted as it could be."

Vibrant traditionally supports cost per click and contextual targeting -- but with programmatic,  it allows the company to integrate the brand's audience data into targeting. Think of it this way. Brands buy keywords and apply audience targeting on top.

The new direction also takes Vibrant into the world of video ad units known as in-line, which serves an expanded advertisement between the paragraphs of relevant words in editorial articles. Both products will run on two buying options -- traditional and programmatic -- and two pricing models, CPM, and Cost Per Completed View (CPCV).

The CPCV option aims to guarantee engaged viewers as brands using the model only pay when a consumer actively chooses to watch the videos. The pricing model follows Google TrueView ads, in which advertisers only pay for the view if individuals don't skip the advertisement five minutes into the video.

The company said its tests show the pre-roll ads achieve between 75% and 90% completion rate across handheld and desktop devices, which the company attributes to its online targeting capabilities. Efficient programmatic ad buying and targeting helps. Some of Vibrant's in-image ads trade programmatically, which some believe will solve the industry's fragmented data silo issues and time-consuming ad bidding systems.

Programmatic brings greater efficiency, which allows buying platforms and advertisers to move beyond some of the issues around losing visibility, Gooding said.

Numerous reports pin online video as the fastest-growing ad category. Zenith OptiMedia pegs the industry growth at 34% last year, reaching nearly $11 billion. The agency expects it to grow an average of 29% annually through 2017, reaching $23 billion. Internet-connected devices will feed into that growth number as the industry matures.