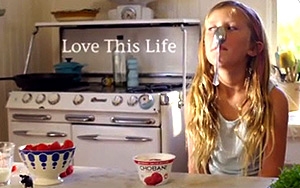 Chobani today launched a campaign that seeks to position its yogurts as being an integral part of a "natural" lifestyle.

The first three videos/TV spots in the "Love This Life" campaign, from the Opperman Weiss agency, integrate the yogurt into scenarios set on a family farm.

One shows a whole family romping in the mud on a farm; another shows the father eating a Chobani yogurt on the porch as a cow appears to ask for a taste; and a third shows the little girl balancing a spoon on her nose and listening to her brother explain how yogurt is made, as she prepares to eat some Chobani.

The ads, which will run on television during prime time through the May sweeps period, are backed by an original, folksy song, "To Love This Life Is to Live It Naturally," written and composed by artist and producer Eef Barzelay for Chobani.

Three more new TV ads — focusing on Chobani 's Flip and Simply 100 lines — will air later this month through September 2015. Those will also include original music by Barzelay. All of the campaign's music selections will be available for downloading on the brand's Web site.

The campaign's creative will also run in movie theaters and on the brand's social media channels. Fans are being encouraged to share about the campaign and its message using #LoveThisLife. Other elements include online and print ads and public relations.

The new campaign takes the brand "beyond food," moving it "more into the lifestyle space, while capturing some of our Mediterranean spirit and soul," said Chobani CMO and brand officer Peter McGuinness.

Chobani is also redesigning its packages so as to promote its key messages — highlighting "only natural, non-GMO ingredients" and "40% less sugar than regular fruit yogurt" on the cups of its original product line, for example. Package redesigns will be seen first on the original line and the brand's Flip and Simply 100 lines.