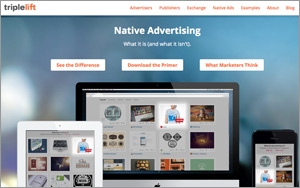 The new service, available for both mobile and desktop channels, will enable marketers to deliver native ads in real-time based on consumers’ online activities, as tracked by Magnetic, for increased relevance and timeliness.

TripleLift’s technology will automatically render native ads, including images and video, in formats that match the appearance of Web sites through in-feed inventory.

Magnetic is already testing the native ad integration with TripleLift in North America and plans to begin tests in Europe in the near future. Magnetic is also participating in TripleLift’s beta program for native video ads.

This is just the latest in a series of partnerships for TripleLift.

Last month, StackAdapt, a demand-side platform (DSP) for native advertising, on Friday announced it was plugging into the TripleLift native ad exchange to gain access to native ad inventory via programmatic direct. Back in December, TripleLift announced that it was integrating its platforms with programmatic ad platforms MediaMath, Turn, Triggit, AppNexus and The Trade Desk, enabling real-time bidding for native inventory.

In March, Magnetic announced that it received a U.S. patent for its search retargeting technology. The patent covers Magnetic’s programmatic technology for retargeting based on keywords, enabling advertisers to reach audiences with digital display advertising, based on search intent.