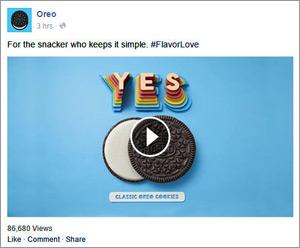 Mondelez International has renewed its global partnership with Facebook, originally signed in March 2014.

In this new phase, Mondelez said, the companies will be focusing on the fastest-growing consumer behaviors — video consumption and mobile commerce — working together to create and deliver video content to drive impulse snack purchases.

Mondelez and its agencies will work with a dedicated, full-time Facebook creative strategist to develop native, scalable video content for the platform that can optimize social engagement. The partnership, brokered through Dentsu Aegis Media, also calls for Facebook to develop playbooks, Webinars and e-learning modules that create a unified approach to developing content for the platform across Mondelez brands.
The global snack and candy maker was unambiguous about its goals: To make Facebook its largest digital storefront and to position Mondelez as an e-commerce leader, with particular focus on driving online sales for its "power brands" in key markets including the U.S., U.K., India and Australia.

“The partnership with Facebook is a core element of our fearless marketing vision which aims at accelerating growth through transformational marketing,” said Dana Anderson, SVP and CMO at Mondelez, in the deal announcement. “Investing in large-scale media partnerships enables us to connect our brands with consumers in new creative ways.”

“Facebook is the number one player in mobile, and its ability to reach Millennial consumers, our primary target audience, is what makes our partnership so invaluable,” added Cindy Chen, Mondelez's global head of e-commerce. “Used by consumers and distributors alike, Facebook is the ideal channel for cracking the code on how to ‘sell a cookie online,’ creating a true social digital commerce model with the potential to become our largest digital storefront.”

Gerry D’Angelo, Mondelez's media director Europe, confirmed that "recent campaigns with brands like Philadelphia in Europe have demonstrated that we can deliver engaging, tailor-made video on Facebook and seamlessly convert that content into purchases."

Maximizing global growth was, of course, the raison d'être for Mondelez's creation through its spinoff from Kraft Foods, and a robust e-commerce channel would seem to promise global marketing access and the ability to leverage the company's worldwide distribution networks while perhaps reducing reliance on and the costs associated with bricks-and-mortar retail distribution.

Also, with food retailers in the U.S. and other markets responding to consumer demand by shifting their focus to fresh and fresh packaged foods and beverages – decreasing emphasis and space for the center store where traditional consumer packaged goods companies' legacy products reside -- major CPGs increasingly are focused on trying to go direct to the consumer by developing significant e-commerce channels.

In May, Mondelez also launched an e-commerce partnership with ChannelSight to add "Buy Now" buttons to owned, earned and paid media platforms across 25 markets, linking to more than 130 retailers' Web sites to make it easy for consumers to find and buy Mondelez products online. The company reported that it was rolling out the program with brands such as Oreo, Cadbury and Trident after a successful pilot phase in 20 markets with more than 100 retailers.