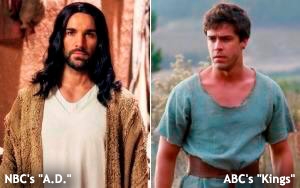 Can a pair of sacred ancient texts make it in a present-day medium that is decidedly unholy?

At the moment, the answer would seem to be no. That's the verdict resulting from the confluence of two events, most recently the news reported in The Hollywood Reporter that NBC has canceled “A.D. The Bible Continues,” its Sunday night biblical series from reality-TV producer Mark Burnett and his wife, Roma Downey.

“A.D” was a follow-up to a miniseries called “The Bible” that averaged more than 13 million viewers per episode on The History Channel in March 2013.

The numbers were a complete surprise to nearly everybody, and NBC thought it could conjure the same kind of miracle with this “sequel” series. Unfortunately, recent episodes of “A.D. The Bible Continues” drew audiences of less than 4 million, so this “Bible” will not be continuing. “A.D” was adapted from the New Testament, and took place in the formative years of Christianity. That’s Juan Pablo Di Pace, as Jesus in “A.D,” in the lefthand photo accompanying this blog post.

Some weeks earlier, at the May upfronts, ABC announced a new series called “Of Kings and Prophets” that would air on Sunday nights next fall. Shortly after the announcement, however, ABC yanked “Kings” from the fall lineup for retooling. Some sources said portions of the show that were screened at the upfront presentations were not enthusiastically received, with some observing at the time that the show didn’t seem ready for prime time. They were evidently correct. Heaven knows when or if this show will premiere now.

“Of Kings and Prophets” was to be drawn from the Old Testament, specifically the stories about King Saul and his descendants, such as David (seen in the right-hand photo played by Oliver Rix).

So, in the space of a couple of weeks, network TV went from two biblical epics to zero. It might be possible to conclude from this situation that religion is not compatible with prime-time television -- at least not in the form of scripted entertainment.

Typically, religion -- particularly Christianity -- emerges as a topic for TV programming every Christmas and Easter (more the latter than the former). At Easter time, multiple networks present new documentaries produced by their news divisions that attempt to plumb the “historical truth” of the Christianity origin story. Their correspondents visit archaeological sites and speak with scholars who sometimes try to connect various findings to Jesus, his disciples and other figures in the New Testament.

At around the same time, ABC usually has its annual presentation of “The Ten Commandments,” a biblical epic with its share of thrills (such as the great parting of the sea). But it’s a movie that grows more campy (if not ridiculous) with each passing year.

In a way, scripted biblical TV series must do their utmost to ensure they are not perceived in the manner we modern-day sophisticates regard “The Ten Commandments” (although, personally, I never cease to marvel at Charlton Heston’s portrayal of Moses).

It’s also true that as a genre of TV programming, biblical shows are virtually unheard of. And that might be the reason why they’re not compatible with prime-time network television, where the prevailing dramas consist, for the most part, of cops, criminals, courts, doctors and lawyers.

Or to put it another way: Network television is a domain of sinners (and a smattering of heroes). Americans seem to accept this fact. And if they’re seeking inspiration or even salvation from either the Old or New Testament, they’re not necessarily looking to television to provide it.