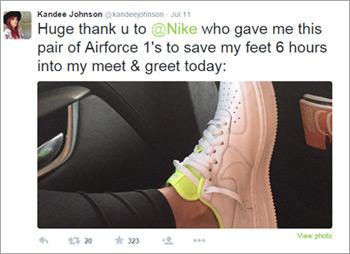 Millennials have changed the rules of influence. They have created and become their own celebrities, role models and icons. And every social network platform that pops up breeds a new set of stars. From YouTube and Vine to Twitter and Snapchat, anyone with a smartphone can create and become anything they want.

In a new digital world where anyone can connect, and news and entertainment organizations are no longer the sole creators of content, a key question emerges: Do brands influence millennials or do millennials influence brands? The short answer is both. But for a more nuanced analysis, let’s take a closer look at influencers — who they are and how to engage them.

Influencers, typically defined as users with large digital followings, have the power to sway their audience’s opinions. The digital revolution has connected people in ways once unimaginable. With few exceptions, we can now follow any part of anyone’s life online. The ability to connect like this creates interesting users who stand out among the masses, and as they grow their following, they become influencers. Millennials define influencers as people they follow on social channels but don’t personally know. Brands define influencers in a different way, by putting a number on a user’s social reach.

Brands are also influencers. Apple and Nike, for example, sell massive quantities of products to a millennial target and, thereby, influence a culture. And none of these brands is blind to the power of digital influencers. That’s why they’ve begun partnering up with social incentives sites, such as Influenster and BzzAgent. Sites like these allow influential users to enter their credentials, which are assigned a value by an algorithm. The site then sends the influential user free products based on his/her potential reach (read: value), with the understanding that the user will review and share the results on his/her social networks. These programs put brands and influencers directly in touch with each other and allow open communication to discuss the value, wants and needs of both parties.

When it comes to successfully engaging influencers, authenticity is essential. Digital influencers create their followings by being relatable and reliable. When brands engage with millennials, the key is to showcase the lifestyle associated with the brand — and that lifestyle has to reflect millennial core values. What are millennial core values? Adventure, flexibility, experience, ambition and empowerment. When brands align their messaging with these core values, millennials are more inclined to buy their products and become loyal advocates.

By defining, identifying and engaging influencers, we learn who they are, but who is actually influencing whom? Brands like Red Bull, GoPro and Apple give millennials a platform to be who they are, but they’re also creating products to fit into their lifestyles. GoPro, for example, just released a new, more compact camera (HERO4) based on feedback from users who asked for a smaller product. For brands that lack a sexy product to generate positive engagement, the approach becomes about creating experiences. Forbes recently published an article detailing how millennials value experiences over products. Millennials tell brands what they want. When brands listen, communication becomes a two-way street and brands can create value for millennials that will attract their attention, gain their business and earn their loyalty.

1 comment about "Do Brands Influence Millennials or Do Millennials Influence Brands?".
Check to receive email when comments are posted.
Next story loading