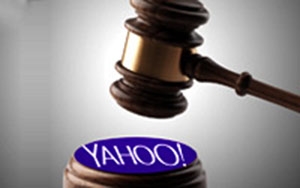 Yahoo must face a class-action lawsuit for allegedly sending unsolicited SMS messages to some Sprint customers in March of 2013, a judge has ruled.

The ruling, issued on Monday by U.S. District Court Judge Manish Shah in the Northern District of Illinois, stems from allegations that Yahoo violated the Telephone Consumer Protection Act by using automated dialers to send text messages without first obtaining the recipients' consent.

The dispute centers on a Yahoo Messenger feature that converts instant messages into text messages. Two consumers -- Rachel Johnson and Zenaida Calderin -- alleged that they received at least two messages through that feature. They said that one of the messages came from other users, while the other -- a "Welcome" message from Yahoo -- explained the first one. The lawsuit deals only with the explanatory "Welcome" messages.

Yahoo also is facing a similar lawsuit in federal court in the Southern District of California. Last September, U.S. District Court Judge Gonzalo Curiel refused to certify a class of AT&T users who received SMS messages from Yahoo in the month of May 2013.

Curiel said in that ruling that class-action status wasn't appropriate, given that some people might have consented to receiving the messages. That ruling allowed the two people who sued to proceed with their cases as individuals.

Late last year, Curiel refused to award Yahoo summary judgment in that matter. Yahoo had argued that its system wasn't an "automated dialer," but Curiel ruled that a jury should decide whether Yahoo's system met the definition of an automated dialer.