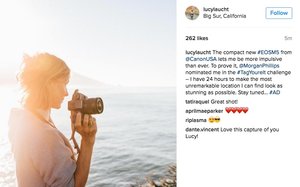 One of the joys of social media is that it allows people who are distantly connected to reach one another and have a little fun.

To promote its EOS M5 digital camera line, Canon USA has created a game of virtual tag with several influencers, daring them to complete a photo challenge in one day, and issuing a similar challenge to a different influencer for the next day. Running on Instagram, the campaign is called (naturally) “#TagYoureIt.”

“We’re challenging these photographers to complete these challenges [because] the EOS M5 has the agility to do them,” Melisa Yoo, marketing specialist for Canon, tells Marketing Daily. “We wanted to showcase how nimble it is.”

The promotion from Grey New York began last week with the company challenging actress and blogger Jamie Chung to create a stylish outfit for less than $5 and share it on Instagram. She then challenged Instagram user “New Fork City” to make kale look as mouthwatering as the user’s typical junk food shots. In all, Canon has lined up 13 influencers known for their food, fashion or general photography to participate in the game, with challenges including creating a nature shot in the heart of New York City, creating an outfit inspired by the year you were born, or making something inedible look delicious.

“Instagram is a platform a lot of photographers and consumers are on daily,” Yoo says. “It’s a visual platform that allows photographers to express themselves.”

After the challenges are completed, the influencers are also invited to issue the same challenge to their followers to see what they can come up with, Yoo says. “We want to see consumers participating with their own photos being uploaded. We want to empower them to show some photos for their own interpretation of the challenges.”

In a similar vein, Canon’s European division has launched a social media campaign taking on the selfie craze. The effort, from digital creative agency Possible, encourages people to carry out a selfless act of generosity over the holiday season, share it on social media using the hashtag @selfieless, and then challenge three other friends to do the same.

“A small act of kindness can make a huge impact, especially at Christmas,” said Lee Bonniface, marketing director, EMEA region at Canon Europe, in a statement. “It seemed fitting to invite people to use their cameras to share a feeling of goodwill this year. It is the most photographed time of the year after all.”