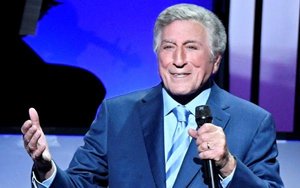 It’s the most wonderful time of the year? Well, that’s how a famous Christmas song describes it -- one of those songs you hear incessantly at this time of year. And trust me, screaming won’t make it stop either.

On TV, however, it’s also the weirdest time of the year -- a time of special programming that comes all at once, preempts all of the regular shows for a month or more, and more to the point, seems vaguely out of sync with the kind of shows we’re used to seeing at all other times of the year.

This week’s two-hour prime-time salute to Tony Bennett on NBC (Tuesday night, December 20, starting at 9 Eastern) is a case in point. The show, titled “Tony Bennett Celebrates 90: The Best is Yet to Come,” commemorates the singer’s 90th birthday. That milestone came and went last summer (on August 3), however.

Whether it is commemorated on or near the actual birthday, or more than four months later as this one is, few would disagree that reaching 90 is a milestone worth celebrating.

Many celebrities (and ordinary people too) are living into their 90s these days. By coincidence, The Hollywood Reporter has a dandy feature story on its Web site, THR.com, in which about a dozen spry celebrities age 90 or over are interviewed.

They include Don Rickles, 90, Dick Van Dyke, 91, Carl Reiner, 94, Cloris Leachman, 90, and others. The “interview” with Jerry Lewis, 90 -- in which Lewis is wholly uncooperative and eventually requests that the reporter be thrown out of his house -- is particularly priceless. There’s even video of it.

Meanwhile, Tony Bennett seems to be in good health. A preview screener of his NBC birthday special was not available on the Web site that NBC maintains to aid TV columnists in the carrying out of their duties. But the publicity photos posted there give the impression that this special figures to be one of the year’s oddest experiences.

Among other images, there are pictures of Tony performing with Lady Gaga (not surprisingly), and other photos of guests such as Stevie Wonder, Diana Krall, Bruce Willis, John McEnroe and Rufus Wainwright.

Seven publicity photos are provided of an apparent comedy bit involving Don Rickles and Regis Philbin interacting with Miss Piggy. That’s a recipe for kitsch if there ever was one.

In other photos, Alec Baldwin is seen in full prosthetic make-up impersonating Tony Bennett. The reason for this is unclear, but a photo shows the fake Alec Baldwin Tony Bennett posing with the real one. I guess we will have to watch tonight to see what happens.

Last night (Monday), CBS gave an hour of prime time to a special show in which Oprah Winfrey interviewed Michelle Obama. On Tuesday morning, the indications were that the special -- which carried the awkward, wordy title of “First Lady Michelle Obama Says Farewell to the White House -- An Oprah Winfrey Special” -- scored well in the ratings. That should surprise nobody.

And just in case you missed it, it airs Wednesday night on OWN too (starting at 9 p.m. Eastern).

Still to come this month: “The 39th Annual Kennedy Center Honors,” airing next Tuesday (December 27) starting at 9 p.m. Eastern on CBS. This show isn’t odd or weird or kitschy. On the contrary, it’s so classy that it sticks out like a sore thumb when positioned next to almost everything else normally seen on TV.

This year’s honorees are Al Pacino, James Taylor, Mavis Staples, the Eagles (the singing group, not the football team from Philadelphia) and Martha Argerich, an Argentinian pianist. Yes, an Argentinian pianist who almost no one in America has ever heard of (other than devotees of such things) will be honored next week in prime time on CBS. Imagine that.