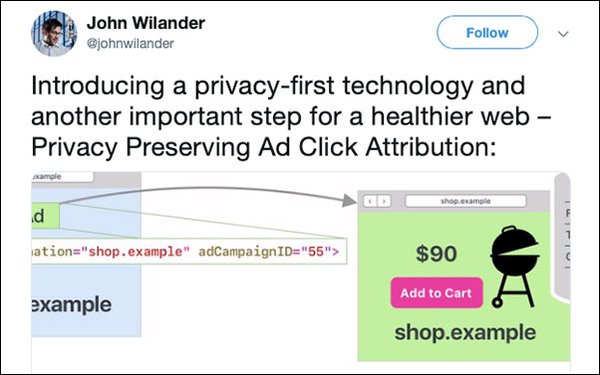 Apple has introduced a new technology that allows attribution of advertising clicks while protecting user privacy.

The approach is more modern, wrote John Wilander, a security and privacy engineer on the WebKit team at Apple, in a blog post on Wednesday. While it doesn’t allow for cross-site tracking of users, it does provide a means to measure the effectiveness of online ads.

The technology is based on something called Privacy Preserving Ad Click Attribution. “It is built into the browser itself and runs on-device which means that the browser vendor does not get to see what ads are clicked or which purchases are made,” he wrote, describing the details of the technology and how it works.

To get a sense of how an ad click attribution works, he wrote: “An online store runs an ad on a search engine website. If a user clicks the ad and eventually buys something, both the online store and the search engine website where the ad was placed want to know; they want the purchase to be attributed to the ad click so that the store knows where to focus their advertising budget.”

The attribution, of course, is used to measure and identify the effective ads.

Wilander said the new technology avoids placing trust in any of the companies involved in serving the ad, from the ad network and the merchant to any other intermediary. It also limits the measurement of data passed between them to prevent communication of a tracking identifier.

Apple also expects to implement a JavaScript API to send the information to a well-known location to remove the requirement for tracking pixels. The company, however, is open to discussing what should go into that API.

The technology will soon be built into the Safari Web browser. It was designed with several principles in mind, such as not uniquely identifying users across the websites for the purchase of ad-click attribution. No one should be identified based on their ad clicks -- only the site where the ad clicks occurred will be able to measure them.

Wilander also wrote that the browser should act on the behalf of the user and do its best to preserve privacy while reporting and attributing ad clicks. This is achieved by sending attribution in a private browsing mode, disallowing data such as cookies for reporting, delaying reports and not supporting Privacy Preserving Ad Click Attribution at all when the user is in Private Browsing Mode.