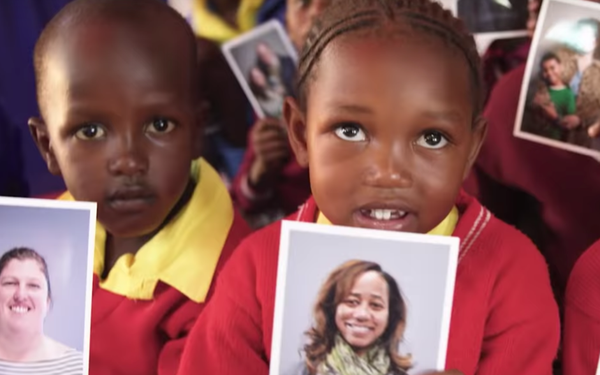 For years, children’s charities relied on a standard gimmick: letting Americans choose a child to sponsor for a set monthly donation.

World Vision, a global humanitarian organization based in Federal Way, Washington, is rewriting that approach. Instead, it’s taking a page from the Procter & Gamble playbook, crafting a video campaign that puts kids in charge, allowing them to pick their own sponsors.

Called “Chosen,” the new effort is meant to “put more power in the hands of children living in extreme poverty,” says Edgar Sandoval Sr., a former P&G exec who worked on “Like a Girl,” the long-running Always campaign.

The launch video shows the process in action: The Christian organization gathers potential sponsors at an event in Chicago, and photographs them. Those photos then go to a tiny schoolroom in Mwala, Kenya. Children there carefully study the headshots, selecting the face that most appeals to them. Finally, the camera returns to Chicago, recording sponsors’ reaction as they open their envelopes and “meet” the kids that selected them.

Sandoval tells Marketing Daily that one goal of the campaign is to “engage the Americana public and let them see they can make a difference.” But just as importantly, it’s to make sure the children it works with feel like they can have an impact on their own future.

He says the inspiration stems from his time at P&G. “Working on 'Like A Girl’ was a great experience for me. I was traveling and speaking to girls around the world, and it was so clear the way they lost confidence around the time they reached puberty. We wanted to be a force for good, and we were. We helped change their perceptions, so that they regarded 'Like a girl’ as a good thing, not an insult.”

He hopes the new effort, even if it’s backed by the small budget of a nonprofit, “will provide that kind of transformation. When I travel, whether it’s to Kenya or Uganda, or Guatemala or Honduras, I find poverty. But the children aren’t powerless — they’re vibrant, resilient and passionate. I always come back energized and optimistic.”

Besides pushing the video out on social media channels, he says the organization hopes the effort will continue to generate sharable content. Sponsorship costs $39 a month, “a fraction of what we pay for a good cup of coffee every day,” he says.

But World Vision is up against considerable challenges. Giving USA, which tracks U.S. charitable contributions,  says Americans are giving less. Despite a strong economy and a 5% jump in disposable income, last year American individuals gave 3.4% less than they had in 2017, about $292.1 billion. And while there was a considerable rise in donations to charities devoted to international affairs -- up 7% to $22.88 billion -- American attitudes toward foreigners are in flux, as debates about immigration, refugees and asylum seekers dominate daily headlines.

White evangelical Christians are especially opposed to foreigners. A recent study from Pew Research Center, for example, finds that 68% of that demographic say the U.S. has no obligation to accept asylum seekers. That compares with 43% of the overall population.