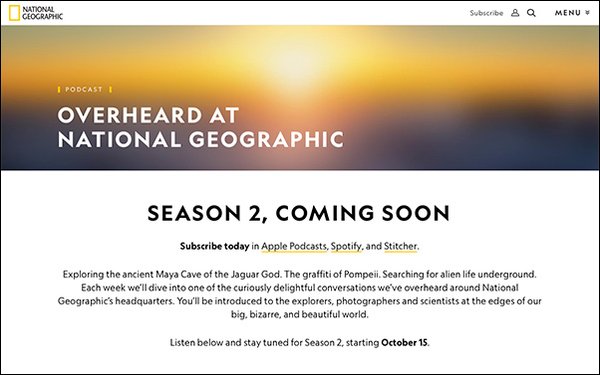 The second season of “Overheard at National Geographic” will air October 15.

National Geographic is bringing the podcast back after the first season resulted in over 1 million downloads.

The first episode, “Searching for Alien Life on Earth,” will feature NASA scientist and National Geographic grantee Penelope Boston, an astrobiologist who examines the most hostile environments on Earth to discover what life might look like on other planets.

Each episode runs under 20 minutes. There are eight episodes.

“Nat Geo headquarters is a daily buzzing hive of surprising conversations among visionary scientists, intrepid explorers and crazy talented storytellers. Our goal at "Overheard" is to bring people into that hive to listen to the most mind-boggling, inspiring stories from the farthest corners of our big, weird, beautiful planet,” stated Gwin.

The second season will explore topics such as the ancient Maya Cave of the Jaguar God and the graffiti of Pompeii.

National Geographic will also host a live podcast recording at its headquarters in Washington, D.C. on December 5. Tickets cost $25.