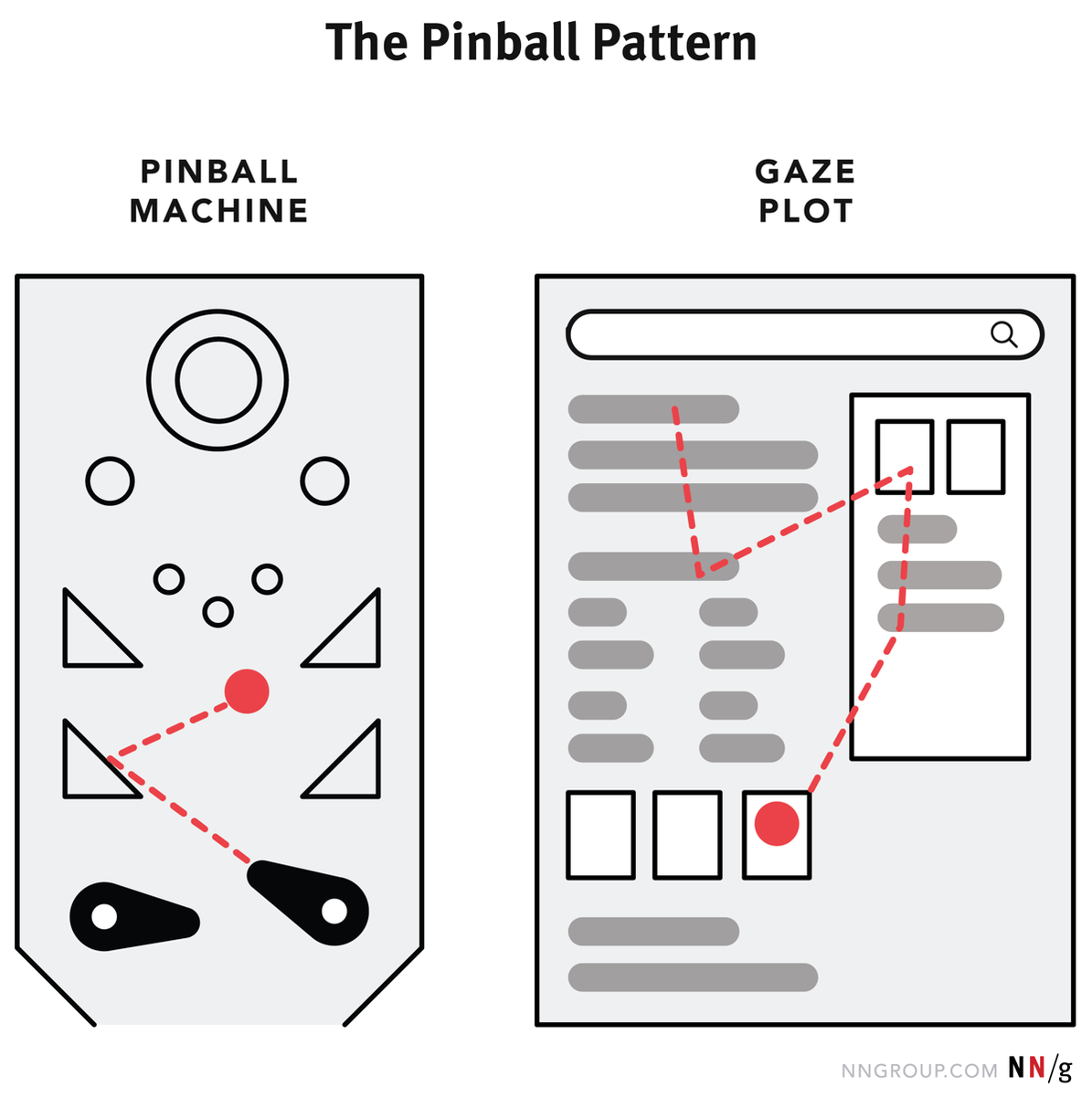 Marketers can no longer expect consumers to start at the top of the page and work their way down.

Recent findings from a study by the Nielsen Norman Group suggest that videos, sponsored product carousels and other types of rich media contributed to the change.

It’s actually the weight of the image on the page that drives people from one visual to another. People scan the patterns, according to the study.

The findings come from the Search Meta-Analysis Project, an analysis of 471 queries made by participants in usability-testing and eye-tracking studies conducted between 2017 and 2019.

The findings suggest that the linear patterns found when someone scans a search engine results page still exist today, but they are the exception rather than the rule. People today tend to bounce their attention from one visual to the next so much so that the researchers created a new description, called “pinball pattern.”

The value for the top spot on a search engine results page, historically, was based on people browsing the listing from top to bottom. The study suggests that this is no longer the case.

The visual weight of each element on the page drives people to scan patterns. These elements typically are distributed all over the page. Some pages have more images than others, forcing people to change their gaze patterns depending on the page.

The number and position of visual elements often influence the visibility of the organic results near them, according to the findings.

Analyzing numerous pages can define behavior. For example, a gazeplot, as the researchers call it, shows a consumer's eye gazes as they search for the best refrigerator to buy.

First, the consumer focused on the prices in the sponsored shopping results on the right of the page, then skipped down and to the left to read the descriptive featured snippet. He then bounced back up to two ads at the top before glancing down to the People Also Ask section of the page, and then to the first organic result that served up on the page.

When featured snippets were present on the page, researchers found they received attention in 74% of cases, with a 95% confidence interval of between 66% and 81%.

Searching for dresser in the site-specific search box brings up a new Google search engine results page with the search-engine command, site:restorationhardware.com ; added to the query.

The command in the search box can raise awareness of advanced search commands, which typically are not used by the general web audience, according to the research. In the 471 queries generated by our participants and studied for this project, not one involved a search-engine command or operator.

The type of task also played an important role in the distribution of clicks. For fact-finding tasks like asking a question — what is the highest mountain in the world? — people relied heavily on the first few results on the page and were less likely to consider results further down. For complex, research-based tasks — how much cement do I need to buy for a ten-by-ten foot yard? — people were willing to dig through and consider lower results.