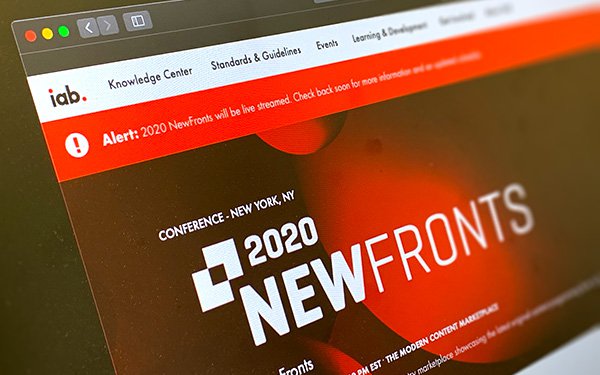 The IAB’s annual Digital Content NewFront event is currently scheduled for April 27 through May 6 in New York City.

The group says: “We plan to add a video-streaming option to let consumer brands, advertising agencies, and publishers design their individual events and meetings to fit their business needs, and facilitate decision-making and buying.”

Two days ago, A+E Networks announced its first virtual upfront event, starting the week of March 23 -- saying it would abandon its live event scheduled for March 25. AMC Networks also said it would cancel its March live event, and would focus on smaller client/agency meetings.

But in the wake of growing concerns over coronavirus issues, the Centers of Disease Control and Prevention and other groups have issued warnings about major live events attracting large crowds of participants who could transmit the virus.

IAB adds: “Presenters will be able to use your own platforms or domains to host the streamed events, with IAB redirecting users to proprietary domains, or viewers will be able to access the presenter’s content directly through the IAB streamed option.”

Upfront TV presentations -- which originated with TV networks decades ago -- have historically provided advertisers and their media agencies with previews of new TV programs for the upcoming TV season, which runs from September to August.

Around 75% of major brand advertisers' national TV budgets are bought in the upfront advertising selling period, which runs from approximately May through August.