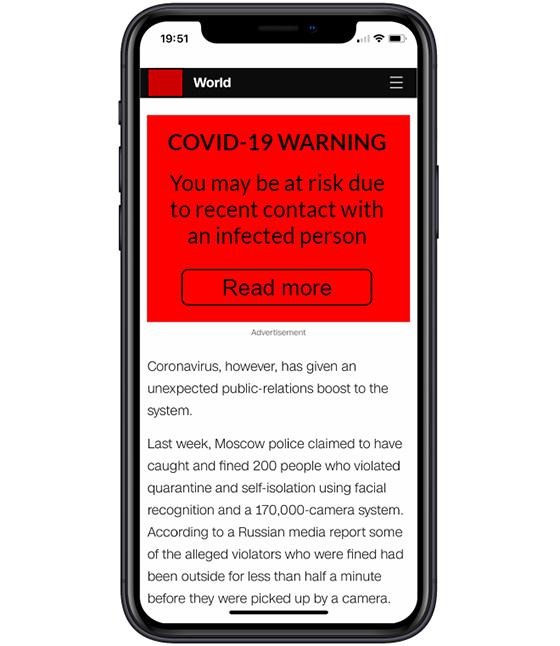 Smartphone tracking combined with testing for COVID-19 can create a framework that would allow individuals, cities, and states to keep an eye on a future outbreak. The app would allow people and technologists to trace where the virus goes. The hope is that it could also protect the privacy of users without creating a surveillance tool for governments.

Software tools that use location history and ad-targeting technology that tracks how the virus spreads have been made available from companies like OnAudience.com, a part of Cloud Technologies Group. The company has developed a smartphone app that gives people information if they come into contact with someone infected with COVID-19.

The app is called COVID-19 Prevention Tool. OnAudience.com CEO Maciek Sawa believes mobile devices such as smartphones will be used to warn people about the risk of becoming infected.

"We anonymously track mobile devices and collect information about geolocation, mainly received from GPS for the best accuracy,” Sawa said. “With a little help of Artificial Intelligence, we can identify people being at risk, because of meeting an infected person or being in a contaminated area.”

In this case, AI and data analysis of mobile devices geolocation is used to warn users about being in close proximity to those who are infected. The technology anonymously pinpoints mobile devices of the infected people and the system knows the places they have recently visited. It then delivers warning messages to people who have met the infected carrier or spent time in the same places.

The app delivers a warning message directly to the mobile device of the unaware users, asking them to take extra precautions or even requesting them to be quarantined.

OnAudience.com data used to target advertisements by using mobile phone IDs for companies like WPP Group is the type of data apps could use to identify movement. What's missing is the data that identify infected individuals. The company uses the same IDs to identify where people traveled from outside to inside the United States. The devise represent the movement of people across the country, but cannot tell if people were infected with the virus.

“We could statistically say in those more 'red areas' the risk of virus being spread quicker is highly more expected due to the amount of people arriving,” Sawa said, explaining in an email to Search Marketing Daily. “Once higher risk areas are identified more tests should be performed in order to eliminate those infected individuals.”

The Massachusetts Institute of Technology (MIT) project SafePaths also developed an app for mobile devices running on Apple and Android operating systems that lets individuals, public health officials, and larger communities identify when someone has crossed paths with another who has tested positive. It's meant to flatten the curve of COVID-19. It’s also aimed at preventing a “surveillance-state response to the pandemic.”

The app notifies the mobile phone user when they’ve potentially been exposed to COVID-19.

Nearly half the world’s population carries a mobile device capable of GPS tracking, and location trails -- time-stamped logs of an individual’s location -- can be created, according to the SafePaths white paper.

On Monday, Facebook CEO Mark Zuckerberg wrote in a post that the company would begin showing an opt-in symptom survey run by health researchers at Carnegie Mellon University.

Answers to the survey would contribute to COVID-19 research. Researchers and health officials believe the data would help determine where to allocate health resources such as ventilators and where to tighten lockdown orders. The data would not be available to Facebook.