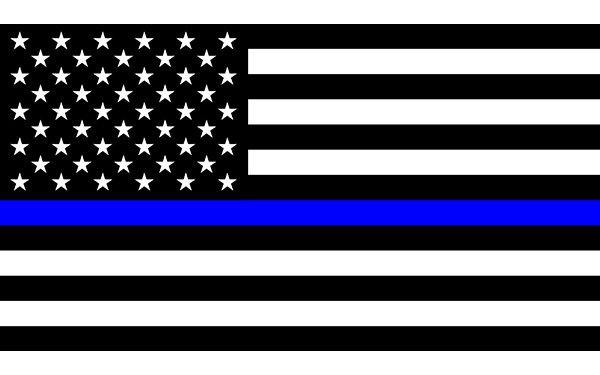 In this time of persistent and much needed social reform, false information validates itself in a logical loop sending facts along with important elements of our lives into the cancel culture ether every day.

The digital industry’s first love, search, is at its core a series of thoughts in the form of words that are then associated and ranked by social distinctions, popularity and sometimes wholly inaccurate associations. The most recent example of this is a flag.

For a whole bunch of reasons, many people are conflating the meaning of "Blue Wall of Silence," and "Thin Blue Line.” Also, a similitude of the Thin Blue Line flag has been used by the now defunct Blue Lives Matter "counter movement,” thereby causing more confusion about the flag’s meaning.

The Thin Blue Line flag has nothing to do with comic book symbology, counter movements, white supremacists, walls of silence or any other form of hate despite the narrative currently being offered.

I’m not going to dignify the white supremacy association, but I am aware of co-opted symbols and adaptations of flags that had to be — with very good reason — retired from time to time throughout history. Appreciated, but it is not much of an argument to place this symbol in the same class as a country that put the world to war and caused the death of millions.

Likewise, it is merely another media inception to associate The Punisher comic book symbol with the Thin Blue Line flag and the Confederate States of America flag.

The only reference to the Confederate flag I have found was a comment made by the creator of the Punisher while on a press tour for his Netflix series. His quote referred to the Punisher symbol on Police cars and its use in the military, not the Thin Blue Line flag. Yet that quote made it into a recent Politico piece, sourced back to the original story that was referenced on Wikipedia.

A quick visit to the Wikipedia pages and you can see how the subjects conflate. The Thin Blue Line flag is erroneously tagged “Blue Lives Matter” and the “Blue Lives Matter” page has the Thin Blue Line Flag its page. These errors – as of publication—are still in place. As we know, a significant number journalists have a long and proud history of living and dying by Wikipedia, so let’s not get into that debate. Social media follows what’s published by the media and accepts content like this as fact, propagates the nonsense and the circular information consumption and self-validation cycle is complete.

There is a Simpsons meme floating around featuring an altered image of Homer racing to put a Thin Blue Line flag into a garbage truck. What a wonderful way to show respect. I saw this in a social feed along with a few choice comments and a complaint that people use symbols like this as what they perceive to be a “get out of speeding free” device in addition to the other false associations I have noted.

The Thin Blue Line flag on my vehicle is there because I understand the history of this symbol and what it represents -- a show of support to our brothers, grandparents, friends and loved ones in Law Enforcement.

I have one in each of those categories. The very same people who go out every day to protect and serve, facing daily life trials and exceedingly difficult decisions. They must work with people having met them at the most challenging times of their lives. They see things, awful things that would leave the strongest of us with permanent scars. And they go to work every day knowing what they will face.

I suppose we can continue to co-opt and surrender our symbols because they do not make us feel good, or dismiss them offhandedly because it’s fashionable or bad people identified with them, but that will not change the facts.  And I suppose you can push it away if you really think it is bad, but don’t do it because you’re being fed a load of nonsense.

Now, it is just my — often debated and questioned — opinion, but I think this is one flag worth keeping.

I will leave you with the following, dear friends — if you have read this far, take it one more step.

"Dallas Police Sgt. Stephen Bishopp has a doctorate degree and has studied police stress, use of force and officer misconduct. The “thin blue line” symbol existed before several of his colleagues were gunned down by a sniper in July 2016, he said. To him, it symbolizes respect and understanding for the families of officers killed in the line of duty — including suicides.

“When I see that flag as a sticker on a car or flying in someone’s yard, I know that there is someone there that knows what I’m going through. They know because they are a part of the family,” Bishopp said. “I don’t really care if it bothers people or hurts their feelings to see that flag. I absolutely could care less. I am proud of what I do, the people I work with, and the ones who have died defending the rights of strangers. I will continue to fly that flag until my very last day.”

P.S. My Apologies, I can’t remember which outlet we are claiming has left or right status at this point, but you can see several examples of the points I’ve illustrated (even if you find the publication’s alignment in conflict with your political affiliation) in this piece from Politico.