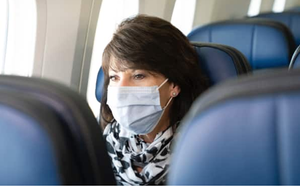 Consumers who haven’t flown since before the pandemic are in for some major changes.

Face mask use has been compulsory for a month, and now all the major airlines are getting serious about enforcing this policy. Passengers who do not comply could be barred from flying with their respective airline for an indefinite amount of time, according to Airlines for America, an industry trade organization.

The measures are expected to remain in place throughout the COVID-19 public health crisis.

Alaska Airlines, American Airlines, Delta Air Lines, Hawaiian Airlines, JetBlue Airways, Southwest Airlines and United Airlines are among the airlines represented by the trade group that have committed to being more vigilant about mask compliance.

In order to keep customers in masks and reduce restroom trips, airlines are also reducing food and drink options offered onboard.

Delta Air Lines will no longer serve alcohol on domestic flights or flights to the Americas, but will serve beer, wine and hard liquor on international flights.

American Airlines and JetBlue are both halting alcohol sales on most domestic flights for economy-class passengers, but will continue to serve alcohol in first class and on lengthy international flights. On United Airlines, prepackaged wines and beers are only available in the first-class cabin.

As for communicating with customers about mask requirements, each airline will articulate its individual face-covering policy in preflight communications with customers, which may require passengers to acknowledge the specific rules during the check-in process.

Once onboard the aircraft, crew members will announce specific details regarding the carrier’s face covering policy including the consequences passengers could face for violating the policy. Each carrier will determine the appropriate consequences for passengers who are found to be in noncompliance of the airline’s face-covering policy, up to and including suspension of flying privileges on that airline.

“Face coverings are one of several public health measures recommended by the CDC as an important layer of protection for passengers and customer-facing employees,” says Airlines for America President and CEO Nicholas E. Calio in a statement.

More than 500,000 people passed Transportation Security Administration checkpoints Thursday, the first time the numbers have climbed above the half-million mark since early this year.

The U.S. remains under a level four travel advisory, which encourages citizens to avoid international travel and requests that Americans abroad return immediately.