Speed Turns Into A Performance Metric, Per Google Commissioned Study 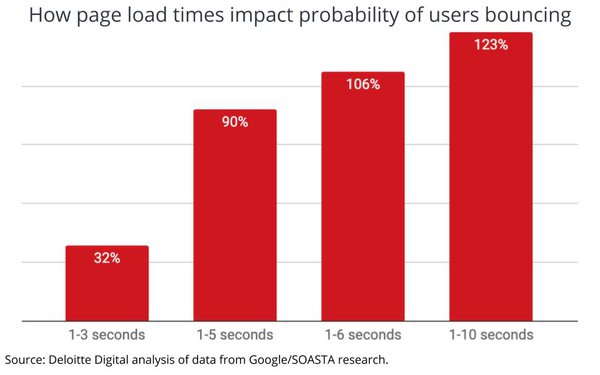 A Google commissioned study carried out by Deloitte Digital analyzed mobile site data from retail, travel, luxury, and lead-generation brands across Europe and the U.S. for four weeks. The analysis isolates speed as a performance metric to observe if there is a true correlation to conversion funnel progress, spend, page views and bounce rates.

With mobile commerce estimated to double between 2019 and 2023, accounting for three-quarters of total ecommerce sales, Google believes it’s essential for marketers to understand the correlation between mobile site metrics and mobile site performance.

Based on a 0.1-second natural mobile site-speed improvement, analysts found key improvements to conversions, and customer engagement found mobile site speed improvements had a direct correlation to improved funnel progression, and had a positive change in the number of page views, conversion rates and average order value across all verticals.

On average, users spent 9.2% more on mobile. Page view sessions rose 5.2% and conversion rates on mobile rose 8.4%. The findings for travel are based on 7.4 million user sessions with an improvement of 0.1 seconds of each of the four speed metrics explained in the methodology section.

Luxury brand page views per session rose by 8.6%, based on based on 2.1 million user sessions with an improvement of 0.1 second of each of the four speed metrics.

The analysis that among all the verticals studied, luxury consumers are the most sensitive to speed improvements. There was a 40.1% increase in users moving from product detail to add to their basket. The bounce rate on product listing page for desktop users increased by 4.8%, yet fell by 3.8% for those on mobile. All these findings related to speed.

The lead-generation information page bounce rate improved by 8.3%, based on 505,000 users. A site-speed improvement of 0.1 seconds observed an uplift of 21.6% from the first step of the form to the form submission page.

Page views on mobile increased by 6.9%. A 6.7% increase in sessions was observed when page speed improved.

For travel, conversion rates were observed to be heavily influenced by site-speed improvements. The page bounce rate for product listings decreased by 5.4% on mobile, while page views per session increased by almost 3%. There was a 10.1% increase in the conversion rate on mobile measured when there was a 0.1 second improvement.

Like it or not, commerce has moved online. In a survey of 1,005 U.S.-based adults fielded in May 2020, Viant Adelphic found that 82% of people who reported shopping online more during COVID-19 say they plan to keep shopping online with increased frequency after stores re-open.