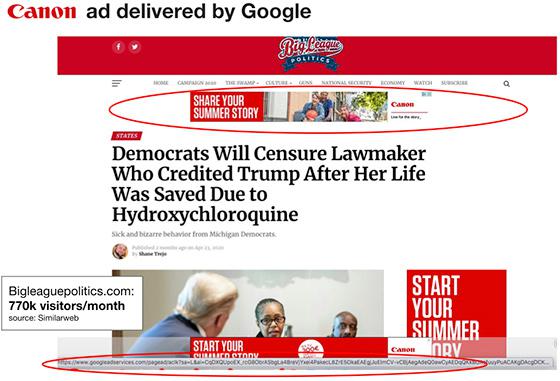 Funded by advertisers, Amazon, Google, OpenX and others this year will unknowingly direct about $25 million to websites that spread COVID-19 misinformation through their digital advertising platforms, according to a recent study published by the Global Disinformation Index.

How much will these companies unknowingly send?

While the Global Disinformation Index suggests these companies inadvertently fund sites that provide disinformation through advertising, the real issue for Google, Amazon and others is identifying those sites and protecting the brands' image by stopping the ability to serve up ads alongside undesirable content in articles.

The report provides examples from brands of advertisements serving up on sites with headlines such as “Tony Fauci and the Trojan horse of tyranny” on WND.com. An ad for L’Oreal delivered by Amazon on American Thinker serves up an ad alongside an article titled “Is Big Pharma Suppressing Hydoxychloroquine?” Or the Wayfair ad delivered by Revcontent titled “Colorado: Bill required “Re-Education” For Parents Who Refuse Coronavirus Vaccine.”

The Global Disinformation Index (GDI), a non-profit organization based in the United Kingdom, aims to disrupt, defund and down-rank disinformation sites. It collectively works with governments, business and civil society. Funding comes from a range of sources including governments, philanthropy, and companies, but no single source makes up more than 33% of the organization's total funding base.

A team made up of 15 experts from Berlin to San Francisco who have worked as data scientists, data analysts, intelligence analysts, and researchers from a mix of backgrounds, including media, journalism, cybersecurity and ad tech analyzed 480 English-language sites between January and June.

The Global Disinformation Index made conservative estimates, warning their numbers could be “the tip of the iceberg.” It also estimates ad revenue may have been skewed by a spike in web traffic sparked by more people being at home and searching for news online and a decline in advertising.

The majority of sites have two or three ads per page, and each has a different RPM. The estimates are based on one ad per page.

The figures exclude advertising on disinformation on social media and video platforms, according to the report.