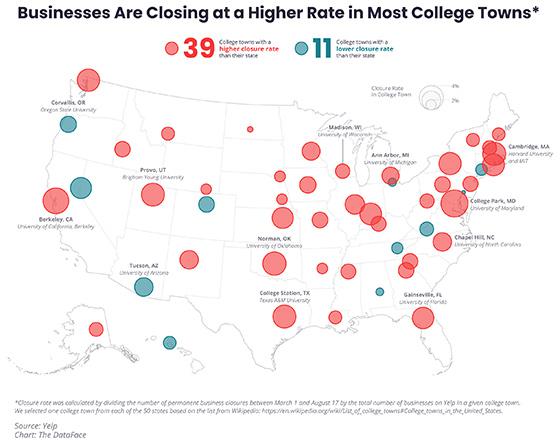 Businesses are closing at a higher rate in college towns, as school administrators are putting restrictions on in-school classes and asking kids to limit extra activities to stay safe.

There are many small cities in the U.S. where local colleges drive economic activity. When students clear out of those college towns, it can have detrimental effects on the local economy.

Retail stores are not the only businesses affected by at homeschooling. Fewer students in these cities means less use of ride-sharing services such as Uber and Lyft. Restaurants are seeing less foot traffic, as well as nail and hair salons.

Automotive businesses have been impacted by 29%, restaurants by 22% and health and beauty by 19%. These percentages represent permanent business closures, compared with their respective states without colleges and universities.

The recovery, however, looks more promising.