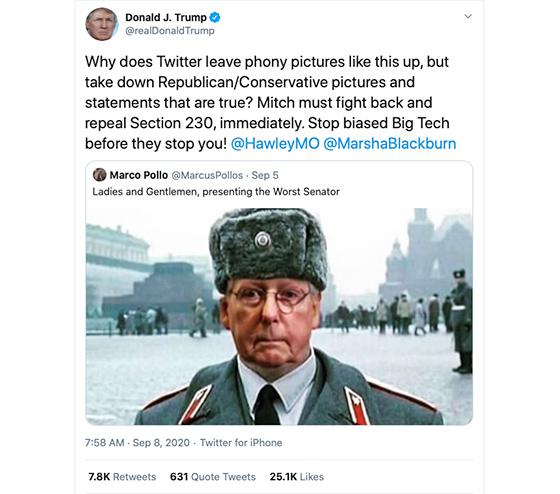 On Saturday, the Twitter account @MarcusPollos posted a photo of Senate Majority Leader Mitch McConnell with the handle “MoscowMitch” -- the nickname first used by MSNBC host Joe Scarborough last year, after one of McConnell's moves to block attempts to prevent foreign meddling in the election.

The photo shows the Republican senator from Kentucky dressed in a Russian military uniform. The image is not only obviously doctored, but also obviously protected as political speech.

But that didn't stop President Donald Trump from retweeting the photo, along with a rant accusing tech companies of being biased against conservatives.

“Why does Twitter leave phony pictures like this up, but take down Republican/Conservative pictures and statements that are true?,” he asked.

He then called for the total repeal of Section 230 of the Communications Decency Act -- the law that underpins the modern web by immunizing web publishers (including social platforms) from civil suits based on material posted by users. Without those protections, few if any of today's social media companies would be willing to risk liability by allowing users to post material that hadn't been vetted.

“Mitch must fight back and repeal Section 230, immediately,” Trump tweeted to his more than 85 million followers. “Stop biased Big Tech before they stop you!”

This isn't the first time Trump has lashed out against Section 230, of course. In May, he directed the Commerce Department's National Telecommunications and Information Administration to petition the Federal Communications Commission for new rules that could link web companies' protections under Section 230 to content curation policies.

The FCC is currently considering that petition, but numerous legal experts say the agency lacks the authority to issue rules regarding Section 230, and most of the FCC's current five commissioners appear poised to dismiss the petition.

In his tweet Tuesday, Trump also repeated the accusation that tech companies' policies somehow discriminate against conservatives -- a claim that no one, including his Commerce Department, has ever substantiated. In fact, when the National Telecommunications and Information Administration asked the FCC to issue social media regulations, the agency didn't present any evidence of bias.

While the petition claimed that social media platforms “appear to engage in selective censorship that is harming our national discourse,” the NTIA acknowledged that “few academic empirical studies” exist.

For the record, New York Law School professor Ari Waldman, who has actually studied the issue, told Congress in 2018 that web companies don't appear to be suppressing speech based on political views.

"Lots of content gets filtered out, but no more so from the right than from the left," Waldman said.

"When victims of racist, homophobic, and sexist tweets and comments post those comments to call out the aggressors, it is often the victims that are suspended or banned," he stated. "Activists associated with the Black Lives Matter movement have reported just as many if not more take downs of images discussing racism and police brutality than any of the anecdotal evidence of suspensions or take downs on the right."

In any event, even without Section 230, the First Amendment would almost certainly protect Twitter from lawsuits over the Moscow Mitch meme.

And if anyone should know that making fun of politicians is fair game, it's Trump. After all, this January he retweeted an obviously fake photo of Speaker of the House Nancy Pelosi (D-California) wearing a hijab, next to a turban-wearing Sen. Chuck Schumer (D-New York) in front of an Iranian flag.

“The corrupted Dems trying their best to come to the Ayatollah's rescue,” the original tweet read, followed by the hashtag #NancyPelosiFakeNews.