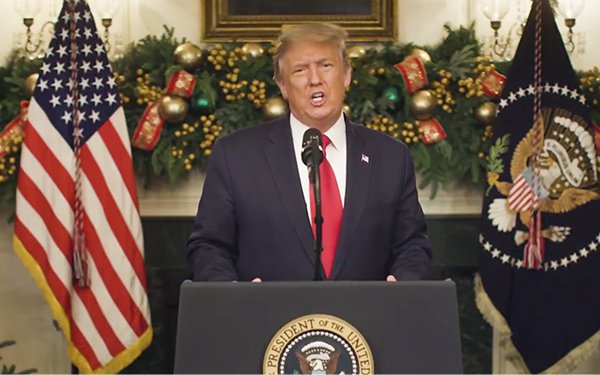 President Trump on Wednesday vetoed the annual military spending bill, in part because it failed to repeal Section 230 of the Communications Decency Act -- a 24-year-old media law that undergirds the modern web.

“Your failure to terminate the very dangerous national security risk of Section 230 will make our intelligence virtually impossible to conduct without everyone knowing what we are doing at every step,” Trump stated in his message to Congress.

“Section 230 facilitates the spread of foreign disinformation online, which is a serious threat to our national security and election integrity,” the president added. “It must be repealed.”

Earlier this month, Trump said in a Twitter post that he wouldn't sign the bill unless it repealed Section 230,which he called “a liability shielding gift from the U.S. to 'Big Tech.'"

The veto sets up an override vote by Congress, where both chambers passed the bill by overwhelming majorities.

Trump cited additional reasons for the veto, including that the bill would remove Confederate leaders' names from military bases.

Section 230 shields publishers from liability over posts by users that are defamatory or otherwise unlawful. Without that immunity, web publishers could face the possibility of ruinous defamation lawsuits for comments posted by users.

That media law has been under scrutiny on Capitol Hill since at least May, when Trump ordered the Commerce Department to petition the Federal Communications Commission for regulations that could curb web companies' protections.

Trump issued the order after Twitter alerted users to dubious claims in two of his tweets. Like some other prominent conservatives, Trump has claimed, without proof, that tech companies are particularly likely to suppress posts expressing right-wing views.

Sen. Lindsay Graham (R-S.C.) tweeted Wednesday that he won't vote to override Trump's veto unless “an effort is made to wind down Section 230.”

Graham recently proposed legislation to sunset the law in 2023.