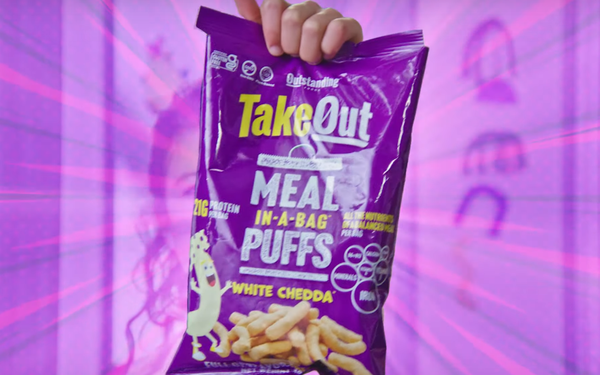 Cheetos’ Chester Cheetah has a new target on his back.

It comes via a campaign for Outstanding Foods promoting the recent launch of the 2016 startup’s plant-based TakeOut Meal-In-A-Bag Puffs.

A spot from the Early Morning Riot agency/production company opens with a young girl holding two bags that resemble Cheetos. She says she used to love to snack on them, but her parents won’t let her anymore “because their ingredients are sh..."

Her last word is drowned out by the sound of a toilet flushing after the youngster dumps the contents of the bags.“That’s where those ingredients belong,” she says.

Grabbing a bag of TakeOut puffs, she adds, “They taste even better than the ones with the Cheetah.”

According to Outstanding Foods co-founder and CMO Bill Glaser, the point is less about going head-to-head with other snack food brands than playing off their weaknesses -- and assuaging consumer guilt.

“What people love about some of those bigger brands is the great taste and experience,” Glaser tells Marketing Daily.  “But consumers have become much more aware of what’s in some of the products they consume—whether it’s artificial ingredients, dairy, all types of fillers, salt and fat.”

As seen in this spot, TakeOut’s Meal-In-A-Bag is positioned as a snack “that can double as a meal,” owing to 21 grams of protein per bag, along with various vitamins and minerals.

While TakeOut launched in late October—at a time when snacking habits had been revamped by the pandemic—the brand’s marketing was a reflection of pre-pandemic consumer behavior, according to Glaser.

“Lots of people who eat snacks feel guilty after[ward], because they enjoy the taste and experience but don’t feel good about the ingredients or the lack of nutrition," he notes. “We didn’t develop the product for COVID, but it’s created a new use case of busy families that are being pulled in every possible by their kids and other responsibilities.”

Glaser and Outstanding Foods co-founder Dave Anderson—whose background includes leading the product development team for Beyond Burger—first approached the snacks aisle in 2019 with PigOuts, which were bacon chips made from mushrooms.

After encountering manufacturing and supply chain challenges, Outstanding Foods pulled the mushroom bacon chips and replaced them with plant-based pork rinds under the PigOut brand in February of 2020.