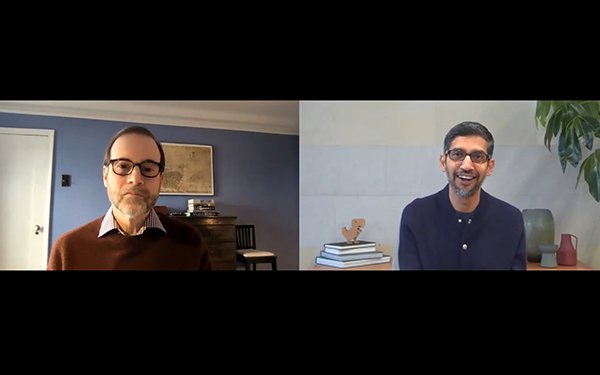 Google had one of the biggest improvements in search results last year thanks to BERT, an advancement in artificial intelligence, according to Alphabet and Google CEO Sundar Pichai.

The technology -- known as bidirectional encoder representations from transformers -- is Google’s neural network-based technique to pre-train natural-language processing (NLP), which aims to identify trends rather than become reactive.

That’s what Steve Adler, editor in chief at Reuters, suggested when he asked Pichai during an interview at the Reuters Next conference whether YouTube clearly missed the clues that certain videos and apps could incite violence.

It’s “a little like getting a smoke detector after the house is already burning,” Adler said.

Google suspended Parler from the app store, and then removed videos from President’s Trump channel when found to violate the company’s policies. Pichai said the company has been concerned that certain videos on the site would incite violence.

“I don’t want to say we clearly anticipated what happened last week,” he said. “But the potential for violence was concerning. There was intelligence leading up to it.”

Leading up to the removal of content, YouTube provides a warning and a three-strike process. Adler said the site took action based on the videos uploaded.

Pichai alluded to YouTube increasing visibility for authoritative content from sites known to be more reliable and accurate -- and suppressing videos that have been shown to violate policies. “We reduce the spread,” he said. “We don’t recommend or promote content that we think violates [policies]. … The internet as a whole, I think, needs to come to terms with what information can spread.”

Pichai calls himself a technology optimist. He noted how the U.S. managed to achieve “the fastest development of vaccines in human history. No expert would have predicted that we would have multiple vaccines in this short a time. That validates to me the process of technology.”

Google has been accused by dozens of jurisdictions across the U.S. and overseas of anti-competitive practices, in areas ranging from search to ad tech and shopping-comparison products. Adler asked Pichai to explain, in his view, why so many governments and regulators are wrong.

Apple has helped Google scale in search. Reports suggest that Google pays Apple as much as $12 billion per year to make the search engine the default on Apple devices.

Still, Pichai said Google is one of the biggest spenders in research and development. The company spends “tens of billions of dollars” to stay ahead and innovate. “We’re open to regulations that make sense,” he said. “We just need to know the rules of the road. … If we need to make changes we will.”

Adler also asked Pichai about his thoughts on Section 230 of the Communications Decency Act, in terms of how to protect free speech and fight misinformation. While some believe it provides too much protection to platforms, Pichai says he has never seen something so foundational, yet so misunderstood.

Many believe the Act only applies to a few companies. Section 230 applies to user-generated content across all internet sites, from someone putting up a website to publisher sites.