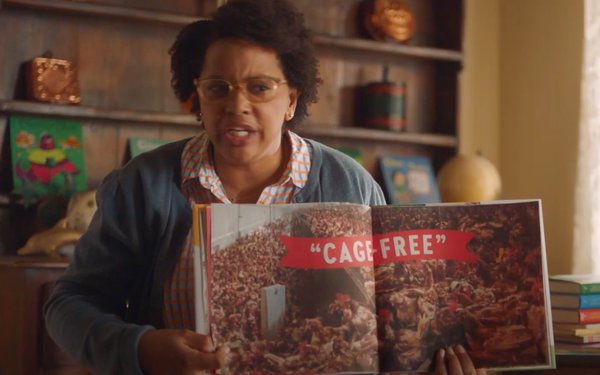 If it’s working, sustain and expand it.

That appears to be the rationale behind a new campaign for Vital Farms eggs, butter and egg bites called “Where Honest Food Is Raised,” featuring local farms and personalities.

It’s the first major campaign in a year from Vital Farms since the company launched a “Traceability” program that lets people view the farm from which their eggs are sourced.

“Where Honest Food Is Raised” puts sustainability and transparent farming practices—as opposed, say, to product taste—front and center as the new tagline not just for Vital Farms shell eggs but all of the company’s products.

The new spots from the Preacher agency feature a Vital Farms employee—accompanied by a fast-talking auctioneer, cheerleaders, a librarian and a news reporter—addressing ethical food production practices and animal welfare claims.

In “Good Story,” the librarian explains to a group of children how “many egg companies want you to think their hens are roaming free and happy. But really, a lot of those cage-free hens are trapped inside. Like recess got canceled forever.”

“A Lot To Say” is the auctioneer’s turn to address cage-free claims by some companies whose chickens “are kept packed in a warehouse because who wants to live in a warehouse? I know I don’t!”

Vital Farms egg bites are the subject of a local news reporter’s “Good News” based on sources who say bites are “both protein-packed and ready in 45 seconds.”

High school cheerleaders explain how “cows are raised in our own backyards” in a spot called “Enthusiasm” that touts Vital Farms butter.

The campaign is aimed at a core consumer group aged 25-49 and about equal in terms of gender and whether or not they have kids, according to Vital Farms senior director of brand Kathryn McKeon.

“It’s not so much about their demographics as it is their mindset,” McKeon tells Marketing Daily. “These are people who are very interested in buying ethically sourced foods and genuinely concerned with the entire process.”

When Vital Farms launched its traceability initiative last January, the brand had U.S. retail distribution of about 14,000 stores. That had climbed to more than 16,000 by November of 2020, when Vital Farms was the #1 egg brand at Whole Foods Market and Sprouts and #2 at Albertsons, Kroger, Publix and Target.

With “Traceability,” shoppers can enter the farm name printed on a Vital Farms egg carton into vitalfarms.com/farm and see a 360-degree video view of the family farm where the eggs were laid.

“We knew it was something our consumers would be drawn to and that they would find valuable. We didn’t really know what to expect on how many videos would be watched and how engaging they would be,” says McKeon.

“A year later, we’ve had over 225,000 videos of people getting their eggs, typing in their farm and watching. Our average video view time is over a minute.”

The four new spots are running across paid digital and social platforms, with streaming TV that includes Apple TV and Amazon scheduled to begin in April.
food
Next story loading