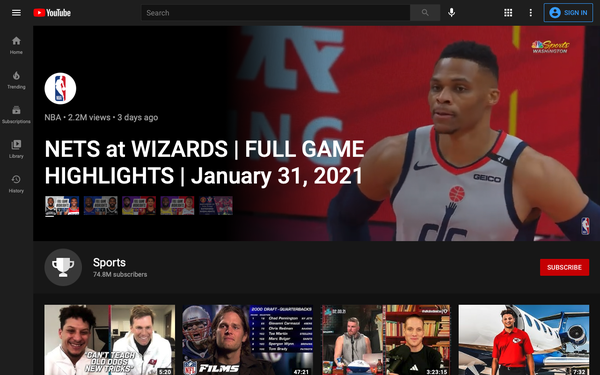 YouTube on Thursday announced an update to its global hub for sports content known as Sports. The changes are being made across mobile, desktop and connected tv (CTV).

The content will offer clips and highlights from top leagues worldwide, along with exclusive live games and premium content from popular athletes and creators. Videos available are from NFL, La Liga, MLB, NBA, and WWE.

In 2020, YouTube experienced more than 40% growth in the U.S. for the number of hours of sports-related videos uploaded to the site.

More than 500,000 channels live streamed on YouTube for the first time in 2020 -- from artists who performed in their living rooms to churches moving their services online. Videos in YouTube’s new Shorts player received 3.5 billion daily views, said Sundar Pichai, Alphabet and Google CEO, during the company’s Q4 2020 earnings call earlier this week.

YouTube also expanded its most popular CTV lineup to new markets into Australia, Canada, India and Japan through YouTube Select, which also includes beauty and fashion, entertainment, music and more. It should make it easier to align CTV ads with YouTube sports content viewed on TV screens across both YouTube and YouTube TV apps.

NordicTrack, an early adopter, continues to see strong results. Ryan Dunkley, vice president of marketing at NordicTrack, believes that the high demand for connected home-fitness equipment during the last year provided an opportunity to rethink the company’s marketing strategy, and ultimately increase investment toward YouTube.

“After a substantial pullback at the outset of the pandemic, brand spending began to recover in the third quarter,” Pichai said. “Marketers realized that even if there was a pullback in consumer demand in the short term, they needed to keep their brands in front of people to stay top of mind when spending pick back up. “

Network revenue benefited from the same uplift in spend by advertisers, particularly in AdMob and Ad Manager. Google other revenue were driven by growth in YouTube's non-advertising revenues, primarily from subscriptions as well as by Google Play revenue growth, he said.