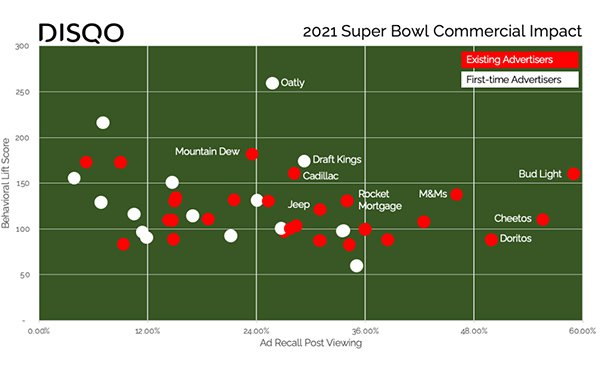 Effective Super Bowl ads typically are not measured by viewer behavior prior to the big game and following the big game. The focus typically turns to the creativity of the commercials and brand recall.

This year, measurement company DISQO wanted to study behavior, so it ran two surveys prior to the big game to ensure that it measured "clean" data.

The third study focused on examining the online behavior of people who saw the commercials, and how they responded and engaged with the brands before seeing the ad, compared with viewing the ad on Super Bowl day and how they reacted to the brand the the day after. Behavior measures, a mid-funnel metric, includes searching for information about the brand or visiting websites.

The surveys were conducted by DISQO and distributed online to a nationally represent samples of adults 18 years and older within the United States via the Survey Junkie platform, which is wholly owned by DISQO.

Both Pre- and Post-Super Bowl surveys garnered 16,997 responses from February 1 to February 9, 2021. More than 66 million online behaviors were collected from January 1 through February 8, 2021, for brands that ran commercials in the Super Bowl.

Bud Light topped the list of the most impactful advertisers with a score of 95.6, by positioning the campaign around the company’s previous mascots such as the Bud Light Knight. It reminded people of Bud Light. They used psychology to play on things viewers already knew.

Rather than relying solely on generating awareness and recall, they wanted to move people further down the website, Bud Light Legends, allowing consumers to interact with the brand. This also allowed them to collect first-party data.

“They achieved multiple objectives with one campaign strategy,” Hunter said.

Oatly, a relatively unknown Swedish oat-drink company, came in at No. 2 with a score of 66.8. The company turns liquid oats into food and drinks.

Oatly’s simple Super Bowl commercial featured the company’s CEO, Tony Peterson, singing about the benefits of their product. When he gets to the chorus, he sings, “Wow, wow, no cow.”

They also saw an “enormous” amount of searches and brand activity, Hunter said. “In many ways, Bud Light and Oatly experienced the same success because they stuck to authenticity and told an honest story,” she said.

The study found the use of creative strategies like celebrity humor tends to work best for established brands because they already have awareness. Challengers need to drive recognition. In fact, too lavish a commercial from a new advertiser can take focus away from the brand and just create social media buzz around the commercial itself, and not the company.

Brands this year looked to gain first-party data through direct relationships in light of Google, Apple and others making changes to protect consumer privacy. The research found that top performers this year made the connection between big and small screens by building interactivity into their strategy.

From BudLightLegends.com to the DraftKings contest, ads that directed people what to do after watching the commercial were most successful at keeping the conversation going with the brand.

Another strategy that created impactful ads made the product the hero of the story. For example, wanting Cheetos was the central theme of their commercial, with support from Shaggy, Mila Kunis, and Ashton Kutcher, and it drove people to seek out Cheetos from online shopping sites like Walmart and Amazon, after the game, according to the data.

Visual impacts also differentiated the brand. Oatly caught the attention of viewers with a quirky music video style ad. Its simplicity stood out among lavish productions and earned solid recall, even compared to much larger established companies.