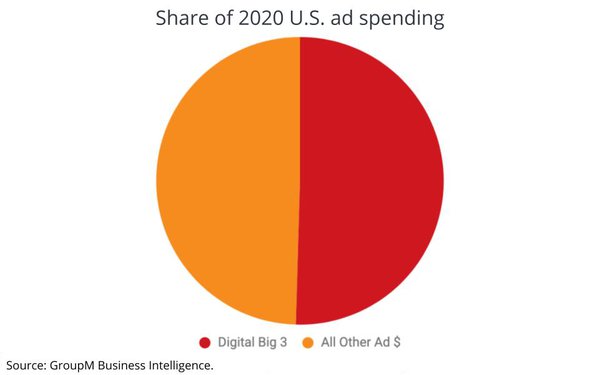 The impact of the COVID-19 pandemic on marketing strategies drove even greater shares of advertising to the tech giants.

Result: Collectively, Google, Facebook and Amazon for the first time attracted the majority of all U.S. ad spending last year, according to a provisional GroupM analysis published by The Wall Street Journal.

The underlying trends, driven by heightened online time and ecommerce — as well as new-business startups — during the coronavirus shutdowns, include the platform’s ability to collect even greater amounts of user data and share it with advertisers, and improved ability to demonstrate return on investment, notes the article.

“These companies that are data-science-driven get stronger and faster with a tailwind of usage — and Covid was a hurricane,” Tim Armstrong, founder of a D2C facilitator firm, The DTX Company, and the Flowcode QR code and a former Google executive and AOL CEO, observed to WSJ.