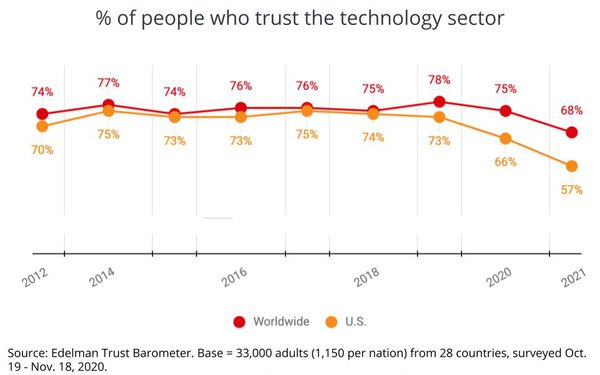 Coming out of a global pandemic in which people were more reliant on technology than ever before, the trust people have in the technology industry has plummeted to its lowest point ever, according to findings of the latest edition of the Edelman Trust Barometer.

While technology still has greater trust levels than many other industries, confidence levels have dropped precipitously, especially in the U.S. where nearly half of Americans no longer trust it.

While the polling reflects the sentiment of the general population, I suspect that a good poll among ad industry professions would show a similar pattern, and it's probably a good time for an organization like Advertiser Perceptions, the ANA, or maybe MediaPost, to field a survey of advertisers and agency media pros who have also become more reliant than ever on utilizing technology to reach consumers.

The problem is that even as the ad industry increasingly depends on technology to intermediate brands and consumers, there is so much complexity, loss of human control -- and worst of all, errors, glitches and even outright fraud -- that it's leading to backlashes at a time when advertising professionals need to be more confident than ever in the tech they use to target, reach, influence and measure the impact of their marketing to consumers.

As they are fond of saying in Silicon Valley, the best technology should be invisible, not something you constantly need to think about. Or worse, worry about.

The declining trust in technology comes as people will face new, even more powerful versions of technology, including AI, 5G, and advanced versions of mixed reality that are likely to erode trust even further. I mean, just consider the impact that so-called Deep Fakes already are having on undermining people's confidence in what they see via technology (see below).

The problem is that we are not just increasingly reliant on technology. We are actually interdependent. As people, and as an industry.

The multiples of technology companies that Madison Avenue depends on have long surpassed the comparable valuations of their customers. And if you ask me, have increasingly been disintermediating them, too.