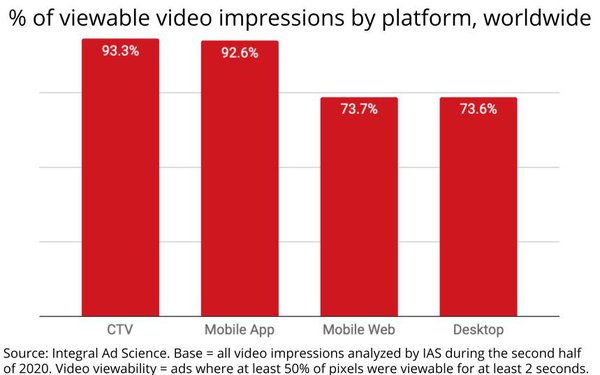 By at least one important quality measure -- so-called "viewability" -- connected TV (CTV) ads are the top of the digital food chain.

That's the finding of Integral Ad Science's (IAS) second-quarter 2020 "Media Quality Report," which for the first time analyzed CTV ad impressions alongside other forms of digital video advertising appearing on mobile apps, mobile web and desktops. The analysis, which covers all impressions across all markets tracked by IAS, found CTV ads averaged 93.3% viewability, meaning at least 50% of their impressions were in view for viewers for at least two seconds.

The finding is important for several reasons, not the least of which is that CTV is the fair-haired child of the video advertising marketplace, rivaling linear TV at the top of media plans for the year ahead.

And while it's assumed that 100% of linear TV ad impressions are "viewable," that was not necessarily the assumption for CTV, which is often rendered by consumers on a variety of connected TV devices where ad impressions may be competing with other parts of their screens.

On the downside, the ad industry now has an index for factoring non-viewable CTV ad impressions vs. linear TV: nearly 7%, at least on a worldwide basis.