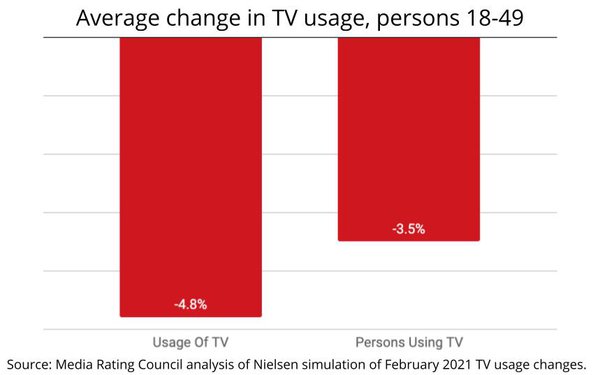 Changes to Nielsen's panel procedures showed persons 18-49 were “understated” by about 2% to 6% in the Nielsen Total Usage of Television (TUT) metric in February 2021, according to analysis by the Media Rating Council.

The MRC met with Nielsen on Monday to discuss its findings. The MRC is a nonprofit organization that manages accreditation for media research and rating companies.

The result, according to the TV industry trade group the VAB, confirms its belief that Nielsen under-counted for a longer time period during the COVID-19 pandemic.

The VAB says this occurred due to lack of maintenance of some 9,400 homes out of a total Nielsen household sample size of 40,000. This was due to pandemic-related disruptions with a lack of access to Nielsen homes, and resulted in a steep total reach decline of U.S. viewers.

The MRC also says that Persons Using Television (PUT) estimates among the 18-49 demographic was understated by 1% to 5% in February 2021.

The VAB says MRC analysis should only be the beginning of what should happen to rectify the situation.

“What we saw today was not an audit,” says Sean Cunningham, president-CEO of the VAB, in a Monday press conference. “The fact the MRC is issuing some numerical guidance is unprecedented. .. This contradicts months of Nielsen denials of any significant problem.”

Recently, the VAB had called for audits of Nielsen to examine the period that began in mid-March 2020, when disruptions caused by the pandemic began.

In March 2021, Nielsen says it resumed maintenance of its national TV household panel.

MRC says that of the 9,400 homes in question, about 2,400 were considered “high priority” -- a condition that affected Nielsen’s ability to collect complete and accurate viewing data from the home. Another 3,000 were a “medium” priority, while 4,000 homes were of a “lower” priority.

A Nielsen statement was released on Tuesday: “On Monday, the company shared its findings with the MRC, “ says a Nielsen spokesperson. “As a result of some of the Covid measures we implemented, we found there was some understatement of audience estimates. The variance differed by daypart, demographic and program.”

Nielsen adds that 93% of Nielsen C3 ratings -- the average commercial minute rating plus three days of time-shifted viewing for persons 18-49 -- resulted in major networks seeing no more than a 0.02 change in rating points.