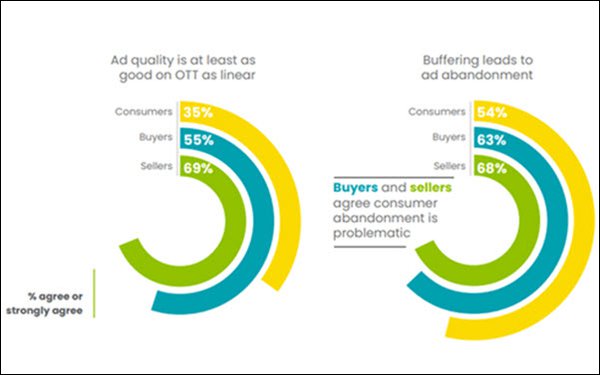 Talk about a perception gap.

While 70% of sellers believe they provide enough data for streaming ad campaigns, just 39% of buyers agree, according to a survey of 608 buyers and sellers conducted by Dynata for Conviva’s 2021 State of Streaming study.

In addition, while nearly three quarters of sellers agree that streaming inventory can be targeted in a programmatic ecosystem and effective audience targeting to households exists for direct buys, fewer than half of buyers agree. 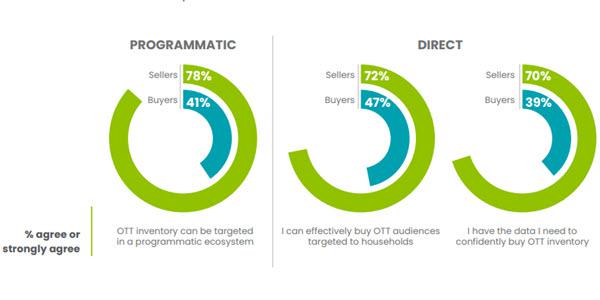 Most buyers are also dissatisfied with transparency about inventory and brand safety.

While 59% agree they have the data they need to confidently buy CTV inventory, just 10% are satisfied with episode-level brand visibility for programmatic streaming buys. And just 8% agree that streaming content’s context is generally safe for their brands.

However, buyers within that 8% were 174% more likely to say they recommend OTT.

This “massive divide” between buyers’ and sellers’ views of streaming’s current status, says cloud-based data analytics platform Conviva, goes a long way toward explaining why PwC projects that U.S. advertisers will spend just 8% of their budgets on streaming even in 2024 — even as 47% of viewing time is already spent on streaming.

Dynata also fielded a survey of 1,944 adult U.S. consumers during the mid-February to mid-April study period.

The study examined 22 different attributes, but only seven were identified as key drivers of viewer satisfaction with streaming advertising.

Positive sentiments about ad experience, relevance, and privacy protections on streaming were strongly associated with overall satisfaction with ads on streaming services.

Just 36% of consumers said they’re satisfied with advertising on streaming overall, 54% said they abandon streaming when ads fail or take too long to load, and 59% said that too many streaming ads are repeated during the same break or episode.

Further, 19% said they abandon streaming if an ad is delayed for five seconds. 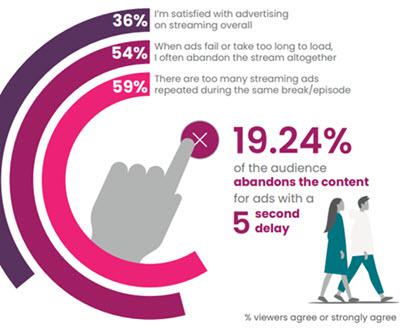 More bad, but hardly shocking, news:  While 56% said they’re happy to watch ads in return for free streaming services, 75% said they usually skip an ad when they have the option.

Viewers are most satisfied when entertaining, quality content is free — and when the ads presented are also perceived as having acceptable quality. “An imbalance in content quality and ad quality can be jarring, and not only impacts streaming ad satisfaction, but can also impact engagement,” notes the report.

And while they value relevance, they say they value privacy even more. Viewers who felt that the ads are generally relevant to them were more likely to be satisfied with streaming advertising overall. But when ads seem too targeted, they began to question what data is being used to target them or where the data comes from.

Consumers who agreed that streaming services protect their privacy were 164% more likely to be satisfied with streaming advertising overall.

But only 31% of consumers are confident that their privacy is protected, and 29% have felt uncomfortably targeted by streaming ads.

Perhaps that’s not surprising, given that only 69% of buyers and 75% of sellers said they consider privacy laws in building ad strategies and selling inventory. Yes, those are majorities, but shouldn’t it be closer to 100% of both segments agreeing with this?

The report identifies four types of streaming viewers among those surveyed.

Given that the last group is both the largest and scores the lowest on all of the key drivers of OTT viewership, “there is a potentially very large opportunity to increase reach and total minutes viewed in the marketplace by improving the ad experiences of concern to the Untapped Potentials,” stresses Conviva.