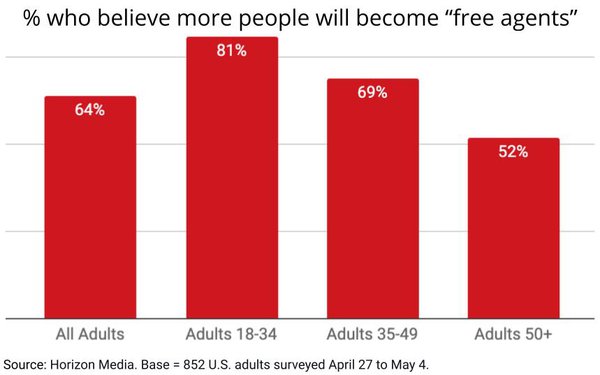 The word "agency" is the most seminal term on Madison Avenue, but now one of the industry's biggest predicts that the post-pandemic future of America will be all about "free agency." Not surprisingly, the shop is the ad industry's biggest independent -- Horizon Media -- and the finding is part of a new report based on some proprietary research indicating the majority of Americans expect to work for themselves, not companies, in the future.

"Economic uncertainty brought about by the pandemic has created a world where forging one’s own path to financial solvency is not just a possibility, but a necessity," the agency's analysts write in "Rebuilding The Future," a new report examining how mega crises such as the financial crisis and the global pandemic have altered consumer mindsets, and the implications for marketers.

"With more people giving themselves agency to future-proof themselves financially, marketers can expect the growing gig economy to transform the market as we know it," the report concludes, adding: "Will brands see blooming new creators and entrepreneurs as challengers and competition or collaborators and opportunity?"

The finding is an interesting existential one for the ad agency world -- where that term has become a loaded one, given changes in advertising and marketing business practices, including the fact that many "agencies" are now treated as "principals" by the media companies they buy advertising from, and sometimes, even their own clients.

The word "agency" has also taken on new impetus in the world of consumer identity-based targeting, where advocates and regulators -- especially overseas -- believe that when it comes to the use of their personal data, consumers should have their own agency -- a concept some are calling "self-sovereign identity."

But even as Madison Avenue alters its understanding of the concept of agency, so are American consumers.

Horizon's proprietary consumer research tracking study found that two-thirds of American adults expect to work for themselves in the future, a percentage that rises markedly for younger adults.

Interestingly, Horizon found those numbers have grown dramatically during just the past few months.

According to the agency's analysis, the percentage of American adults who believe they will become free agents has grown 10% since it first benchmarked that question in November 2020 vs. its most recent survey fielded in April/May. Among 18- to 34-year-olds, the percentage has grown 25%.

Calling free agency an "imperative in action," the report goes on to make the case for how digital media and technology is accelerating it, including creator "accelerator" programs at major social media platforms such as TikTok, Snapchat and Clubhouse that are encouraging individual entrepreneurism, as well as emerging technology such as NFTs -- or non-fungible tokens -- enabling a "new monetization method" for both consumers and brands.

What's the bottom line for marketers? "Expertise is a salable commodity," Horizon advises, adding: "Be a knowledge center and resource that Advances the free agency mindset."