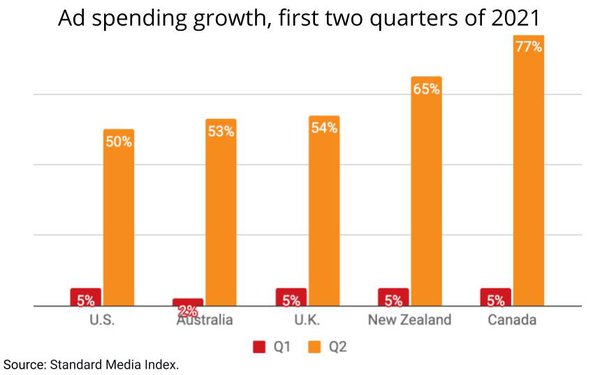 Evidence is mounting that the global ad economy -- at least in the Western World -- is shifting from recovery to expansion, and maybe even a boom.

Standard Media Index (SMI), which pools media-buying data directly form the computerized payment systems of major ad agencies, this morning released the latest analysis of ad growth in the major English-speaking markets -- the U.S., U.K., Canada, Australia and New Zealand -- showing that ad spending in Anglo markets in aggregate expanded 25% in the first half, and 52% in the second quarter.

The quarter-to-quarter acceleration in ad-spending expansion surely represents the fact that the first quarter of 2021, was only marginally impacted by advertising cutbacks due to the COVID-19 pandemic in 2020, which really began to manifest in March, but as the most recent data from SMI's U.S. Ad Market Tracker -- a collaboration with MediaPost -- indicates, the year-over-year expansion has more than made up for the recession of 2020, at least in the U.S.

The U.S. ad market expanded 43.3% in July, the first month of the third quarter, and barring another major marketplace disruption, looks on track to sustain that rate of growth.

Coming off a succession of upgrades for the global ad economy from the major agency holding company ad forecasters, it now appears eminently clear that we have gone from bust to boom, even as the global pandemic remains rampant and is even accelerating again due to Delta and other variants.

What does this mean? If you ask me, it signals that even with that kind of disruption baked into the equation, marketers and their agencies have adjusted for and "normalized" marketing budgets to deal with it.

That's an important insight, because chances are the planet will not be immune from future pandemics, but at last the ad world has figured out how to operate around that. For now.