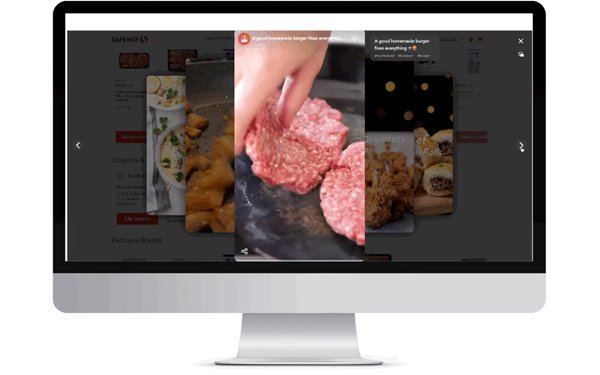 Customers on Albertsons Companies-owned sites and apps will soon have the ability to view a shoppable video for a recipe, load all the items required to make the dish in a shopping cart, and purchase all with just one click.

Then the goal is to have the items delivered to the consumer within an hour.

Albertsons Companies owns stores such as Safeway and Jewel-Osco. Albertsons will become the first U.S. grocer to use this short-form shoppable video platform.

The grocer intends to begin by publishing video content around recipes and meal prep using foods that are on its shelves by brands it supports.

The launch is scheduled for mid-October, according to Firework President Jason Holland, with a goal to connect the entire open web, not only retail stores to consumers, but also consumer product goods (CPG) marketers and clients.

Websites and apps allow consumers to research, get tips and advice, and read reviews. Now they will let consumers view cooking and recipe tips through shoppable and livestream videos.

The service will have a sponsored ad offering, but serve a list of products in a specific category and allow consumers to choose the product brand they wish to buy.

“We don’t want to sell through interruptions,” Holland said.

The idea is to get consumers interacting with the content and brands.

“As we finalize partnerships with major holding companies like Publicis and Dentsu, our goal is to bring our technology to all their agencies and markets,” Holland said. “We can now take video content from P&G, Unilever or another brand and ingest it into the Albertson’s feed, so they can communicate with shoppers.”

Data that will become available from Fireworks to Albertsons includes video views, time spent on a live stream, and the number of people viewing the live stream.

Holland said Firework can link into a retailer’s order system and shopping cart to process and fulfill the order through an acquisition, yet to be announced.

Firework, a short-form video platform company, will make it possible for Albertsons Companies to deploy the shoppable video format in mobile apps and on its stores’ websites.

Now Firework works with more than 600 direct-to-consumer brands, retailers and media publishers. It raises more than $100 million in capital from financial companies such as IDG Capital, Lightspeed Venture Partners and GSR Ventures.

'It's kind of mind blowing, the sophistication of the technology because firework's code to deploy on a retail site is one line of code, loads in less than 200 milliseconds and build outside of an iFrame," he said.