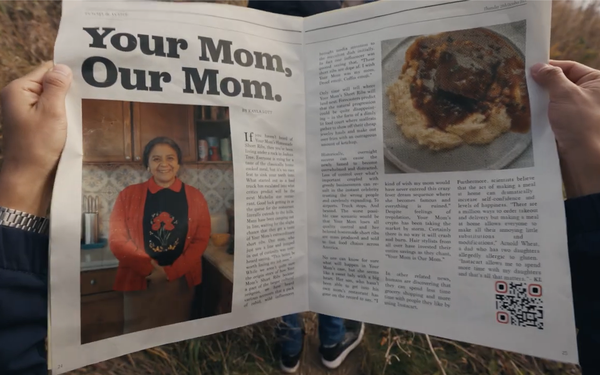 The online grocery platform created the spot -- How Homemade is Made, in partnership with Goodby Silverstein & Partners (GS&P) and award-winning director Ian Pons Jewell. The message centers on celebrating food made with love and care, and invites people to share their love through food to celebrate the moments that happen at home.

The story’s narrative encourages viewers to imagine a world where one-of-a-kind family dishes were commercially available.

Rich Silverstein, co-founder and co-chairman of GS&P, believes the agency “developed the ‘How Homemade is Made’ campaign to highlight how the traditional concepts of food, family and shared meals that consumers crave and not only live alongside modern technology, but also can fuel it.

“No one can deliver your mom’s homemade short ribs,” the narrator says, as the images scroll from mom cooking and braising the meat to long lines at a restaurant in the 60-second spot. “That’s why Instacart helps to deliver the ingredients.”

The campaign includes 60- and 30-second television commercials that will run from November 14, 2021 through January 2, 2022 on ABC, CBS, and NBC, online video such as YouTube, paid social, influencer marketing with the hashtag #HowHomemadeIsMade, programmatic advertising, as well as digital out-of-home (OOH) through the holiday season.

The campaign also makes every dish shown in the commercials instantly shoppable with live QR codes that take customers to a shoppable recipe on the Instacart app.

Instacart has also refreshed its visual identity, bringing images of food shared in familiar settings among family and friends into brand creative and the Instacart app.