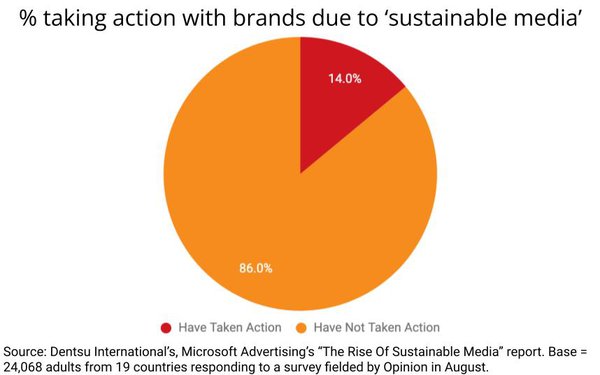 While only 14% of consumers say they have explicitly taken an action related to a brand due to the sustainability of the media they use and/or the carbon impact of their advertising, a new report from Dentsu International and Microsoft Advertising indicates "sustainable media" will increasingly become a major factor for consumers, brands, government and the ad industry at large.

The report, "The Rise Of Sustainable Media," is drawn from a study of more than 24,000 adults fielded in August by Opinion, and the findings show a rising concern among consumers about the role brands and media play in climate change and the sustainability of the planet.

One of the overall top-line findings is that 59% of consumers say they plan to begin boycotting brands that don't take action on climate change.

In the sections that deal specifically with how the advertising and media that brands use play a role in the carbonization of the planet, significant percentages of consumers say they plan to switch to more environmentally-friendly search engines (21%), opt out of ads that have a negative impact on climate change (25%), and subscribe or buy media proven to show environmentally friendly advertising.

While the study shows consumers are taking a more activist view of brands, advertising and media related to climate change, it also shows that many still don't understand the actual role media plays in carbonization.

"Just one in seven (15%) people from the study think browsing the web contributes to climate change, whilst just 17% perceive watching TV as contributing to carbon emissions, [and] 14% say the same about gaming and 11% in regard to streaming music," the report notes.

In terms of who should be most responsible for the decarbonization of advertising and media, half of consumers worldwide and in the U.S. cited "government," while slightly smaller percentages indicated the overall "ad industry" and/or individual brands and companies.

Only about a third said consumers should be responsible for these changes.

“The customer actions and potential boycotts we unearthed in our research are squarely down to the consumer’s perception of a company and its behavior, not necessarily the reality," Dentsu International Global CEO of Media & Global Clients Peter Huijboom said in a statement released with the report, adding: "As marketing experts it’s our responsibility to guide businesses and help educate and inform their customers, in order make them think, feel and act differently." 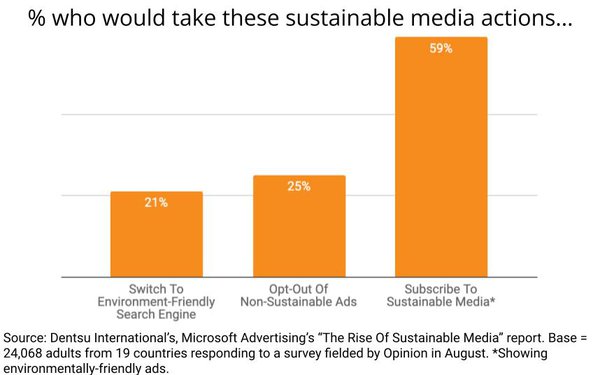 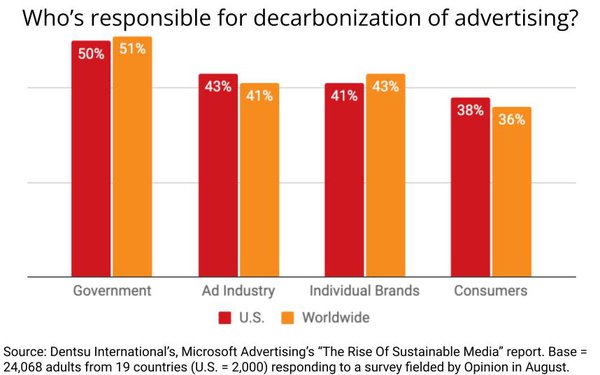