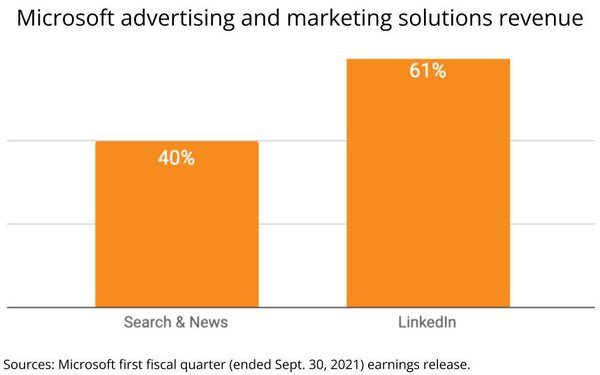 Microsoft says LinkedIn sessions have also grown by 22%, with “record engagement,” with more than 20,000 events.

“LinkedIn has become one of the world’s largest platforms for professional events,” said Microsoft CEO Satya Nadella, during the company’s earnings call.

The business continues to see record engagement on the platform.

Microsoft Cloud, which combines the company’s cloud-related businesses, grew revenue 32% year over year to $22.1 billion compared with a 36% increase in the September quarter.

Gaming, which now represents nearly 11% of total revenue, became a focus for investors this month, after the company announced plans to acquire Activision Blizzard for $68.7 billion.

"Following the Activision acquisition announcement, there has been much debate over the price tag of $69 billion and how that translates to tangible value for Microsoft,” said Mediaocean CMO Aaron Goldman. “To get a sense of how that could play out, it’s worth looking at Microsoft’s biggest acquisition to date, LinkedIn in 2016 for $26 billion.”

Goldman said that Microsoft’s acquisition of LinkedIn gave the company new revenue streams like advertising while capitalizing on the larger trend of social media. With Activision, Microsoft can boost its gaming revenue stream and build around larger ongoing trends such as the metaverse, esports, and streaming.