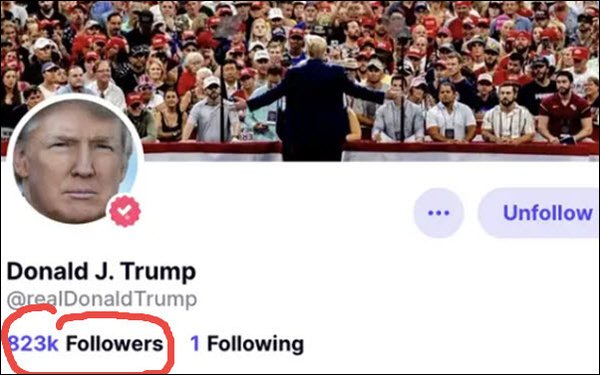 Two key tech executives have quit Truth Social, the Trump social platform that has stalled since coming out of the gate on Feb. 20.

Conservative Southern tech entrepreneurs Josh Adams and Billy Boozer, who joined the venture less than a year ago, have resigned, as first reported by Reuters.

The plan was for the iPhone app to be fully functional across the U.S. no later than the end of March, according to Devin Nunes, the former GOP congressman who is now CEO of Trump Media & Technology Group.

But the project has been stymied by glitches, and many would-be users are still on a weeks-long waiting list.

Trump — whose sole post on the platform so far was on Feb. 11, before its formal launch (“Get Ready! Your favorite President will see you soon!”) — had about 823,000 followers on it as of April 1 (screen shot above, followers circled).

In comparison, in January 2021, when he was banned from Twitter for violating its rules with posts that posed the risk of inciting further violence following the Jan. 6 insurrection, Trump had more than 88 million followers on that platform. He was also suspended from Facebook and YouTube.

Since its launch, the app has dropped from being the top app downloaded from Apple’s U.S. App Store to 173. Time spent has also declined.

Sources told Reuters that Adams and Boozer were critical to efforts to developing and getting the app on track, but did not say why they quit or whether their roles had been reassigned to others. It's also possible they might still be serving the venture in other capacities.

The Truth Social platform is currently like “a conservative  ghost town overrun by bots,” Rosie Bradbury, European tech fellow for Business Insider, reported on April 2, after spending a week on the app.

In addition to the dominance of bot activity (most of the replies to Trump’s single post were ads for a niche cryptocurrency), the platform’s problems include gaps in its functionality, such as a non-working direct messaging feature, Bradbury found.

Aside from Fox News host Sean Hannity and Republican Congressional reps Marjorie Taylor Greene and Paul Gosar (who respectively had 372,000, 71,600 and 12,400 followers), few GOP (and no Democratic) lawmakers have presence on the app, she reports.

Even Murdoch-owned The Wall Street Journal has no presence, nor do The New York Times, NBC or CNN.

Fox-owned TMZ and The Daily Mail do have presences, but Fox News’ is ambiguous. An account called @FoxNewsChannel had just 5,920 followers and had only posted 30 times, and an RSS aggregating bot for Fox Sports’ website (76,300 followers) appeared not to actually be affiliated with Fox, per Bradbury.

The app suggests 50 accounts to follow, including Hannity’s and that of Kyle Rittenhouse (269,000), who was acquitted last year of murdering two protestors in Wisconsin — along with others such as "Cats with Jobs" (38,000) and "Hot Chicks Golfing" (61,000).