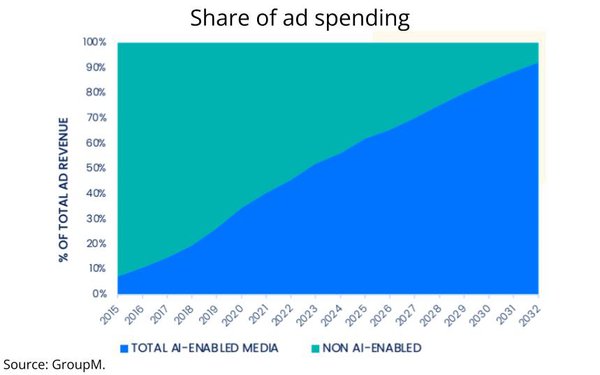 Artificial intelligence (AI)-enabled media will account for $370 billion in ad spending this year -- and will represent the majority of all ad buys, according to a new proprietary forecast released by GroupM this morning.

"AI infiltration of the advertising industry has happened largely behind the scenes, with the general public aware primarily of its failures: the 'creepy' retargeting ad that follows someone around the internet, the disastrous outcomes of weaponizing targeted advertising systems to sow division and misinformation," GroupM Global Director of Business Intelligence Kate Scott-Dawkins writes in the report's introduction, noting: "These examples are unfortunately more common than we would like to think — and probably largely unattributed by consumers to the use of AI."

While she acknowledges that GroupM's 10-year forecast is "speculative," she says it is rooted in GroupM's proprietary insights based on current trending.

For the purposes of the analysis, GroupM defines AI-enabled advertising as "any artificial intelligence used in the process of advertising, from insight generation to activation and optimization.

"We include technology and algorithms that sit under the umbrella of AI, such as machine learning, neural networks, computer vision, natural language processing (NLP), and intelligent process automation," she writes.

The report also includes benchmarks and projections for AI-enabled ad spending by medium (see below) and, not surprisingly, the most established digital media -- the kind that are more easily and commonly purchased programmatically, account for the biggest shares of that market, especially search and non-search digital ad media.

The analysis excludes AI-enabled ad revenue from "creative ideation and production," as well as other forms of marketing, such as AI-chatbots handling customer service, etc. 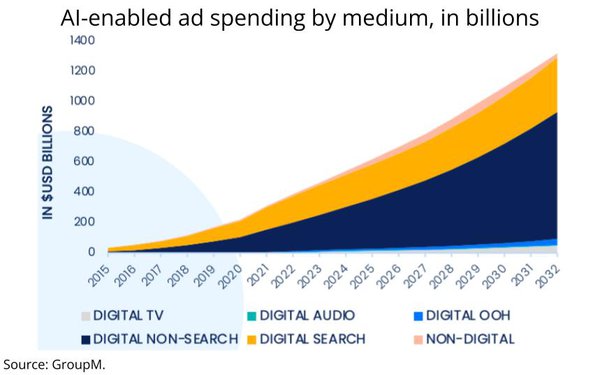