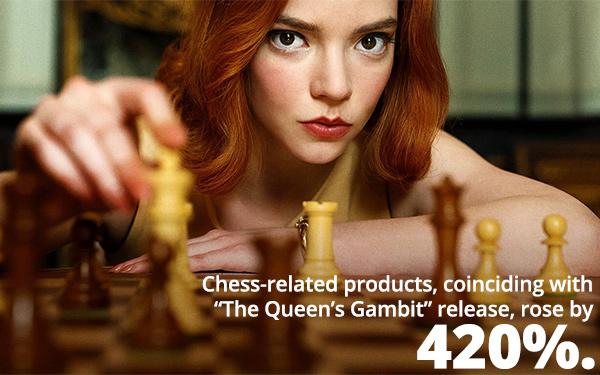 An analysis of the paid clicks trending upward on Amazon today can identify completely different consumer spending habits from two years ago when the Centers for Disease Control and Prevention (CDC) designated the COVID-19 virus as a pandemic.

Lifestyle shifts have become evident through changes in online shopping.

Helium 10, a software and analytics solution for ecommerce sellers, released data on Wednesday showing that clicks for luggage saw a 573% increase in December 2021, following a lull during global lockdowns in 2020. Personal grooming also rose in clicks, with shaving kits seeing a 155% increase during the same time period.

Products related to the Netflix hit “Tiger King” saw a 277% increase in clicks a year after its release, while chess-related products, coinciding with “The Queen’s Gambit” release, rose by 420%.

The data suggests that the popularity of “Tiger King” had a significant impact on purchase decisions. The jump from October 2020 to October 2021, 277% year-over-year increase in clicks, can be explained by widespread vaccine availability and renewed interest in social gatherings, according to the report. Stay-at-home fatigue reached an all-time high during this time, and people began to embrace the “new normal” after a year of limited social interaction.

The term “chess” also saw click volume peak in November and December thanks to The Queen’s Gambit, which shows how media creates permanent shifts in consumer interest regarding certain products. The clicks jumped by 420% from November 2019 to 2020. The data shows a sustained, long-term interest in chess sets following the initial spike seen in 2020. About 62 million people watched The Queen’s Gambit within the first 28 days of its release, a number boosted by widespread lockdowns.

Helium 10 used the volume of clicks sourced from paid search ads that served up on Amazon in search results in December 2021. By calculating the percentage increases of total monthly clicks for terms, the company can understand, at a relatively macro level, month-by-month interest online for a certain product or trend.

Gym equipment has also been trending up:

Data in the report -- Lysol, Luggage, and the Great Lockdown: What Amazon PPC Searches Reveal about Online Shopping during the Pandemic -- explores online pandemic shopping and highlights how the Amazon marketplace mirrors pop-culture trends during the past two years.

For example, clicks for Lysol hit their peaks in April and October 2020. When comparing March and April 2020 vs. 2019, the data shows a 7520% increase in click volume. Sweatpants saw similar spikes, but not as drastic.

Sweatpants saw a 362% increase in clicks from April 2019 to April 2020, which declined by 75% the following April in 2021, as the world began to open and people ventured outside.

On the road again? Luggage is another term that parallels travel bans and restrictions that were put in place across during 2021. As air travel decreased, searches for luggage saw a steep drop. In July 2021, data shows a 573% increase in clicks for “luggage” compared with July 2020. And, shaving kit click volume increased by 28% in 2021, compared with 2020. April of 2020 saw the lowest demand for self-care.

As universities reopened or implemented hybrid models in the fall of 2021, interest has rebounded for backpacks, with August 2021 seeing a similar 32% increase when compared with August 2020.