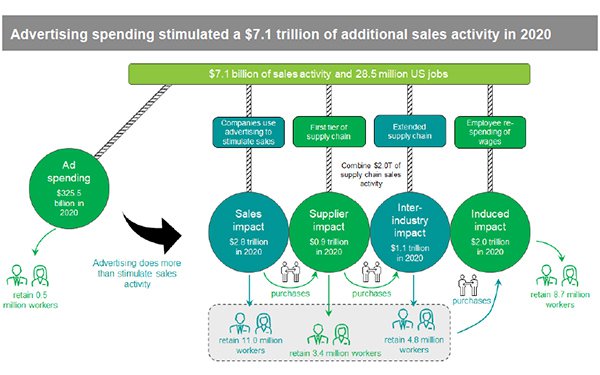 Research released from The Advertising Coalition and conducted by IHS Markit on Wednesday finds that advertising generated $7.1 trillion in sales in 2021, and it supported 28.5 million U.S. jobs.

The study found that the total impact of advertising and its multiplier effects represented 18.5% of U.S. gross domestic product (GDP) and supported nearly one-fifth of all American jobs in 2020.

ANA CEO Bob Liodice believes the “advertising industry is an engine of growth for the American economy.”

The Advertising Coalition members include the ANA, 4A's, AAF, NAB, and News Media Alliance, among other companies and associations.

The data suggests the impact from advertising will generate $9.5 trillion in sales by 2026. This would support 31.9 million domestic jobs.

This is the first analysis of the economic impact of advertising by IHS Markit on behalf of The Advertising Coalition in seven years.

The current study examines advertising spending in the U.S. and contributions to the economy, such as advertising to stimulate sales, purchases of goods and services throughout the supply chain, and the re-spending of wages by employees in the advertising industry.

Steve Pacheco, President and CEO of the American Advertising Federation, called advertising an “absolute necessity” and not a “luxury,” and that the study demonstrates what the industry has long known.

The research shows how every dollar of ad spending supported nearly $21 of sales, on average, and advertising helped generate $13.5 million of sales activity per minute.

It also found that for every million dollars spent on advertising, 83 American jobs were supported across a broad range of industries throughout the economy, with the average salary for jobs supported by advertising was $73,000, 12% above the national average.

The study also looked at how proposals that allow 50% of advertising expenditures can be deducted in the year they occur and the remaining 50% amortized over five- and 10-year periods would impact economic activity in the years between 2021 and 2026 had they been adopted in 2020.

Under a five-year amortization plan, 2.6 million jobs and more than $680 billion in sales activity would have been unrealized relative to the untaxed forecast in 2021. Under a 10-year amortization plan, in 2026 there would be 1.6 million jobs and $490 billion in sales activity that would go unrealized due to the change in tax treatment of advertising.