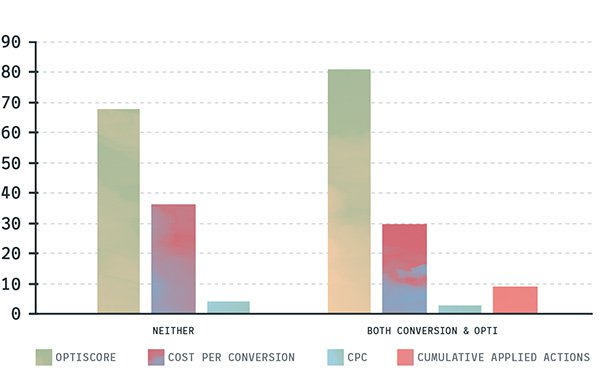 Approving or declining a Google recommendation like changing a bidding type can influence a brand’s optimization score (OptiScore) when running search campaigns.

Applying 10 recommendations increases the paid-campaign optimization score by 3.19%, or 4.4% on average, according to the data, based on three million days of ad spending across tens of thousands of campaigns, data shows.

“The data shows marketers taking or declining recommendations, but we could see if it increased the optimization score and produce a better result,” said Mike Lane, CEO and founder of Fluency.

Google in January stated that a clear connection between increasing a campaign’s optimization score and improving the cost per click, cost per conversion, and other key metrics.

The validity of these benefits has been the subject of much discussion, with a range of opinions -- but given the strength of these claims from Google, Fluency wanted to see how they stood up to independent scrutiny.

The Google OptiScore study provides advertisers with a dataset that tests and confirms outcomes and best practices.

The data shows that a 10-point increase in optimization score correlates to a 4% reduction in cost per click, about 20 cents of $4.79, according to the data, which was gathered in November 2021.

Accounts that increased the score by at least ten points saw a median decrease of 12% in cost per conversion, as well as a median increase of 10% in total conversions. About a quarter of accounts in this study were able to increase their score by ten points within a month of applying their first optimization-score recommendation.

Lane said that to take 10 actions and increase performance by 10 points isn’t that difficult, adding that “doing something matters.”