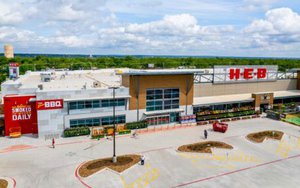 As consumers galloped into the $100 billion online grocery shopping market, a new ranking from Dunnhumby underscores just how strong regional grocers have become. The Texas-based H.E.B. edges out both Amazon and Amazon Fresh, powered by the intense emotional connections it builds with its loyal customers.

“H-E-B’s impressive performance proves that it’s possible to compete and win against Amazon when it comes to grocery e-commerce,” says Grant Steadman, president of North America for Dunnhumby, a customer data company based in Chicago, in its announcement.

He adds that H-E-B’s strength is evidence that regional retailers can do a great deal to differentiate themselves online, building simple and easy-to-use tools for online shoppers.

Walmart comes in fourth in the ranking, followed by Sam’s Club, Kroger, BJ’s and Sprouts.

Stores that lean most on intermediaries score lower and have higher bounce rates and fewer page visits. And Instacart, Shipt and Door Dash had lower emotional connections than nearly every grocery retailer measured.

It’s the first time Dunnhumby, a data company based in Chicago, conducted the ranking.

It uses a consumer survey-informed statistical model, predicting how well retailers respond to customer needs most linked to e-commerce and emotional bonds. And it calculates ecommerce performance using a thorough composite score of change in web visits from 2019 to 2021.

It finds that about 40% of consumers are omnichannel grocery shoppers, with 38% between the ages of 25-54, with at least two children. Typically, they purchase groceries online about twice a month. The data also finds that three of every five grocery trips are online. And they spend about $531 per month in all food stores, with $131 going to a single retailer.

Conversely, those who shop only in physical stores are older, with 57% percent over age 55. Typically retirees or empty nesters, this group spends less–about $382 per month. About $111 is spent at a favorite store.

But retailers should stop making assumptions about the financial resilience of online shoppers.

In separate research, Dunnhumby says inflation is causing consumers to consciously cut back on food spending, especially among online shoppers.

It says online grocery households are 6% more likely either to have skipped a meal or trimmed spending because of rising food costs. And they are 10% more likely to have difficulty covering an unexpected expense.

The company says the findings flout conventional wisdom that online shoppers are less likely to be attentive to costs.

“While 60% of all households with children are doing some of their shopping online and despite being higher earners on average than brick and mortar only shoppers,” says Steadman, “they are struggling more financially.”