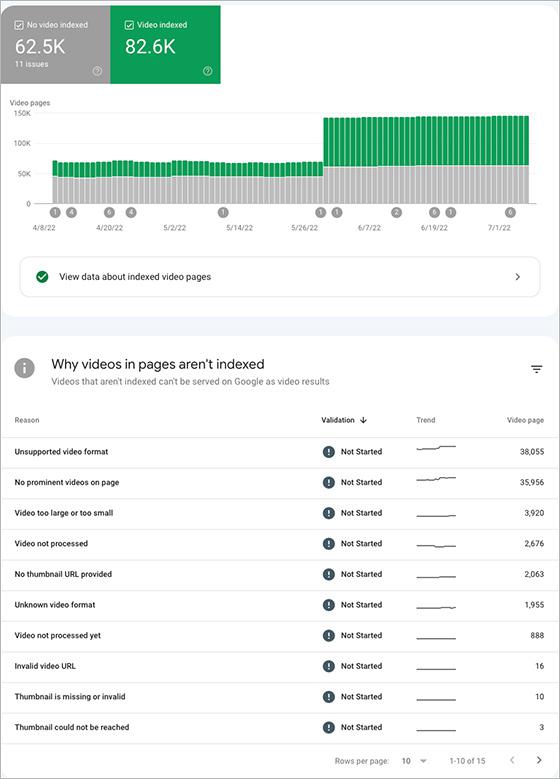 Google began rolling out a video indexing report in Search Console on Monday.

The process will take several months. The company introduced the report in May.

Video is a growing format for content creators, because consumers want to view a visual in all places across the web from Google Search and YouTube, to Google Images and Discover.

Google’s video indexing report aims to help marketers understand the performance of the videos and identify possible areas of improvement.

The report lists the number of indexed pages on a site containing one or more videos, and on how many of those pages a video could be indexed.

If Google does not detect a video on a website, it will not generate a report.

The report also provides information on the issues that prevent videos from being indexed. If a marketer fixes an issue, the report can be used to validate the fix and track how the fixed video pages update in the Google index.

The report is different from the Video Rich results report. It does not show the validity of Video structured data items.

The Video Rich results report is unchanged and continues to show the Video structured data items are valid or invalid on a site.

This does not apply to live inspection, per Google, which does not show video indexing status and will only indicate if a video was detected on the page being inspected.

The amount of money that U.S. advertisers will spend on creating digital video marketing and advertising continues to grow -- not just on the web, but also on television.

U.S. advertisers will spend $63 billion on programmatic video, according to the analyst firm, which Axel Springer SE acquired in January 2020.

Connected television (CTV) is fueling programmatic video. The analysts estimate that three-fourths of U.S. CTV display ad spending will transact programmatically in 2022. This includes YouTube, and nearly all of YouTube’s advertising, which sells through automation.

Google has also published a guide to help marketers get their videos found in search. The company suggests making a dedicated page for each video, where the video is the most prominent subject on the page.

Some features require that type of video page, including Key Moments, the Live Badge, and other rich result formats. Include the video in an appropriate HTML tag.

Best practices suggest Google can more easily identify a video on a page when there is an HTML tag around it.