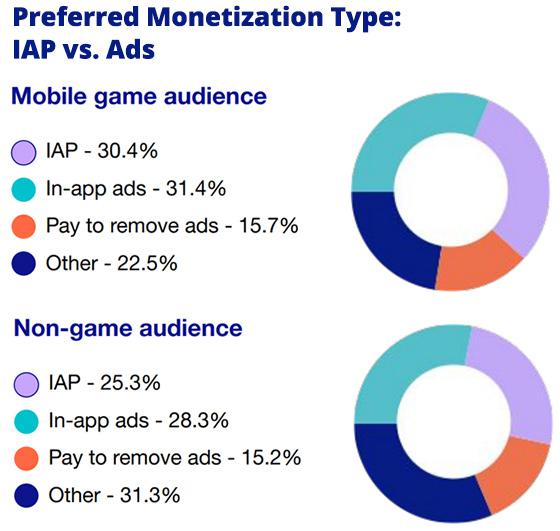 What turns an app into a favorite and how much are gamers and non-gamers willing to spend for in-app purchases varies based on several factors. Some want a one-time fee to remove ads, while others are content with an ad-supported model.

IronSource surveyed users from gaming and non-gaming apps across its network, as well as a control group outside of these apps to eliminate bias and confirm accuracy. The goal was to identify common threads in how mobile users find and interact with their favorite apps.

App-related spending habits have changed in the past five years.

Those surveyed in mobile games and non-gaming apps are nearly evenly split between preferences for in-app purchases and ad-supported monetization models. Mobile games have long been the preferred medium for emerging ad formats like rewarded ads and playables.

The data shows that apps outside the gaming category represent similar opportunities for brands and marketers.

Having diverse monetization options will satisfy the largest group of consumers, but preferences vary by age and other demographics. Generation X is most likely to make in-app purchases “occasionally” or “often,” but this same demographic prefers the ad-supported model to in-app purchases.

In the study’s control group, 24% of Zoomers -- people born in the late 1990s and early 2000s -- said they would prefer a one-time fee to remove ads. Other groups were less fond of that option.

Across all surveyed groups, consumers were almost evenly split in their preferences for in-app purchases versus seeing an ad to monetize the play or use. Marketers may want to think about diversifying monetization strategies to meet consumer expectations.

While around one-third of all groups surveyed said they never pay to download apps, between 28% and 49% occasionally make in-app purchases of a few dollars at a time. This means they will spend once they have already committed to an app and understand its value.

About a third of consumers on the ironSource network make occasional in-app purchases of a few dollars each -- significantly more than the 2% to 3% considered standard five years ago.